JOHOR BARU - For pocket money of between RM1 and RM20, two underage girls were forced to have sex with Bangladeshi men on several occasions in a hotel room as their mother watched.

The woman would receive RM50 for each sex session that involved both her daughters, aged 13 and 10.

The 39-year-old "monster mother" has admitted to committing the heinous crime and faces a lengthy time in prison.

The Sessions Court sentenced her to a total of 150 years' jail after she pleaded guilty to 10 charges of prostituting her daughters.

According to the statement of the facts, the mother forced the girls to have sex with two men at a budget hotel here on five dates - Oct 1 and from Oct 4 to 7.

The unemployed woman would watch as the men took their turn with the young girls.

The accused was caught by the police on Oct 25 after the 13-year-old made a cry for help to a teacher via WhatsApp.

The teenager, who had been absent from school for 18 days, apparently texted her teacher using the accused's mobile phone, saying that her mother had sold her to foreign men.

Her teacher told the school authorities and the matter was forwarded to the state education and welfare departments, as well as the police.

In the courtroom yesterday, the mother, clad in an orange tudung, blue top and long pants, kept her head low as she pleaded guilty to the charges read out to her by a court interpreter.

The accused, who cannot be named so as to protect the children, was not represented by counsel.

In mitigation, she pleaded for just a fine, citing that she has two other young children, aged five and four, to care for.

The single mother was seen to show no signs of remorse but looked teary after the sentence was passed by Sessions judge Kamarudin Kamsun.

He sentenced her to 15 years' jail on each charge. However, the sentences are to run concurrently for those charges with the same date, which means she will spend 75 years in jail.

It was reported earlier that the accused was detained by police on Oct 25 at her home in Senai. 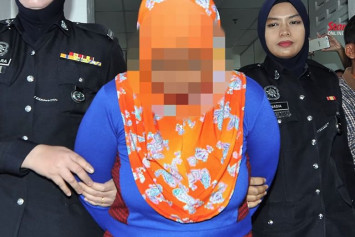 She was living with the two daughters, who are from her fourth and fifth marriages, in one of six rooms at a two-storey commercial building in the area.

The girls were sent to Hospital Sultanah Aminah for check-ups and medical reports confirmed that there were old tears around their private parts.

They are being cared for by the state Welfare Department.

Hearing about the mother's sentencing, a neighbour who wanted to be known only as Malar said she hoped the children could move on and have a fresh start.

"I feel sorry for the kids and hope that with proper counselling, they can overcome this ordeal and live a better life," said the 38-year-old housewife.

The girls, she added, did not talk much and seemed to be obedient to their mother.

She said that she has not seen any other children with the woman, except for the two girls.

In a previous interview, Malar told The Star that the family was rather reserved and rarely stayed in the room after they moved in sometime in August. She also said the younger girl appeared to be a slow learner, barely spoke and did not go to school.