Mother: Suspect used to bully my boy in school

In grief: Mother D. Shanti being consoled by R. Thiyagarajan, a relative, after she found out that her son Nhaveen (below) had died at the Penang Hospital.

GEORGE TOWN - One of the youths suspected of beating T. Nhaveen to death had apparently roughed him up three years ago.

"They may have hidden their faces, but I still recognise one of them. He beat my son when he was 15 years old," Nhaveen's mother D. Shanti said at the Penang Hospital yesterday.

"Nhaveen came back one day with his shirt rumpled, saying he was beaten up by a boy.

"I went to the school the next day and warned the boy never to touch my son again, but he claimed he was just playing with him," she said.

"That night, Nhaveen made me promise to never tell his teacher about the incident because that boy threatened to beat him up if I did.

"My son said that boy told him, 'You are a pondan (transexual) and I have to make you a man'." 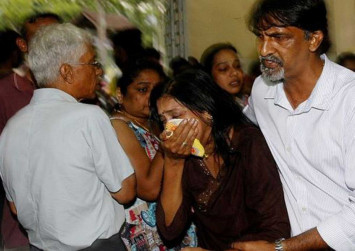 According to Shanti, Nhaveen said he would bear the taunting and verbal abuse for two more years until he complete his SPM and could pursue his ambition to be a music composer.

"He could have been beaten up again after that, but I will never know now," she added.

She said her son was relieved and much happier after leaving school.

"Music was his world and his closest friend Previin shared his love for it. They spent hours on their earphones."

Meanwhile, two of the five suspects detained in Nhaveen's murder have been rearrested over a separate incident.

He said a 19-year-old youth claimed he was beaten and blackmailed by the suspects.

The complainant, ACP Anuar said, had lodged a report against the duo on May 5 but withdrew it three hours later.

"We have reopened the investigation," he said, adding that the matter was being investigated under Section 147 of the Penal Code for rioting and Section 385 for extortion.

ACP Anuar said the other three suspects would be rearrested in connection with the May 5 case.