Motorcyclists can ride for free on Penang bridge if Barisan wins, Najib promises

“There will be no motorcycle toll on the Penang bridge if Barisan retakes Penang,” said the Prime Minister during the “Balik Pulau bersama Perdana Menteri” programme at SM Seri Balik Pulau yesterday.

Among them are a new specialist clinic and hospital ward costing RM500mil and a women and children’s hospital, estimated at RM296mil.

Others are a RM496mil multi-storey hospital block for Seberang Jaya and smaller projects between RM7mil and RM108mil.

“We will take care of the welfare of the people in Penang although we are not the government,” he said.

“There is much more that we can do but the people must ensure a victory for Barisan,” he said.

The state Barisan will be launching its manifesto on Penang mainland on Sunday.

“We have achieved an economic growth of 5.9% and the ringgit has strengthened against the greenback.

“So what are the Opposition trying to save the country from?” he asked.

Najib said he was confident Barisan would retain Balik Pulau. 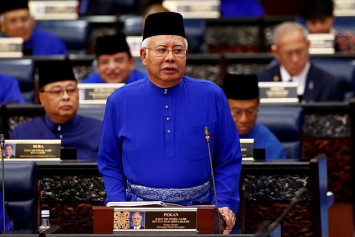 Later, at a dinner with the people in SMK Teluk Kumbar, Najib said Penangites who were against the reclamation project in the state should give the mandate back to Barisan.

He said the Federal Government did not agree with the project’s Environmental Impact Assessment (EIA) as it affects fishermen and the environment.

“But, our stand on the project can only be made clear if Barisan is given the chance again in Penang,” he said

Najib was referring to the Penang South Reclamation Scheme, which is a massive plan to reclaim three islands totalling 1,800ha off the southern coast of Penang.

He compared the project with the Federal Government’s projects such as MRT, HSR and ECRL, which did not require any reclamation.