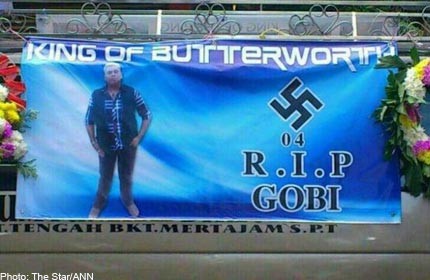 A banner on M. Gobinath’s hearse during his funeral in Butterworth.

GEORGE TOWN - Those seen parading in the streets with banners bearing the Gang 04 logo during the funeral procession for the five men killed in a shootout with police are gang members, said Penang CID chief Senior Asst Comm Mazlan Kesah.

"We will definitely be taking action after identifying them.

"What they did was also against the law under Section 43 of the Societies Act for joining an unlawful organisation and taking part in an illegal assembly," he said when contacted yesterday.

More than 800 people turned up for the funeral at the Batu Gantung crematorium on the island and the Hindu cemetery in Jalan Siram, Butterworth.

In Butterworth, the hearse of J. Gobinath, 31, had a "04" banner and a picture with the words "Perai Gobi".

The hearse of 21-year-old M. Gobinath had a floral wreath designed with the word "GOBI" together with a picture banner bearing the titles "Gobi Butterworth" and "King of Butterworth" as well as a message "We will miss u 4ever Bro".

In Banting, 32 people from the Kuala Langat district in Selangor have been arrested in the Ops Cantas police crackdown.

Selangor acting police chief DCP Datuk A. Thaiveegan said 31 men and a woman, aged between 20 and 43 years, have been remanded to assist investigations on a number of cases including murder, drug possession, vehicle theft and blackmail.

In Johor Baru, 64 individuals were arrested throughout Johor yesterday.

Most of the suspects detained were former Emergency Ordinance detainees.