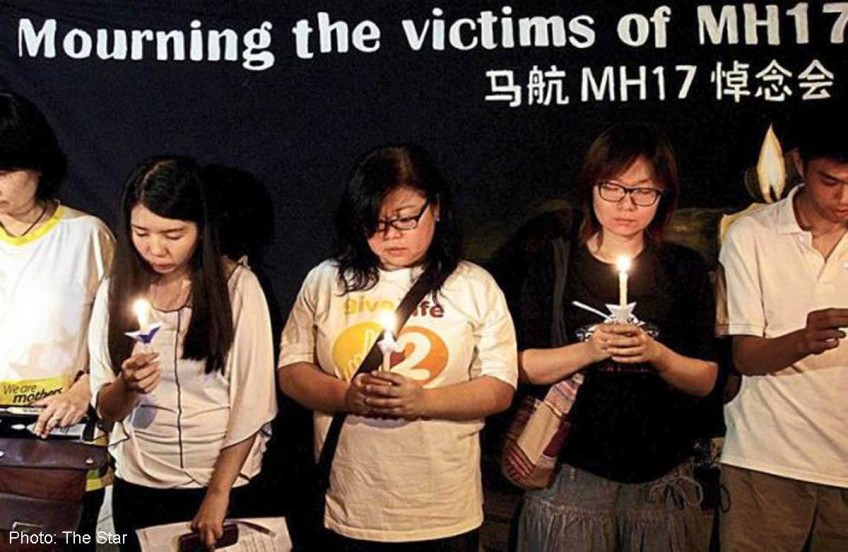 IT WAS a solemn sight at a memorial service for the ill-fated MH17 flight in Jalan Panggong, Kuala Lumpur on Monday night.

A small group of 80 people from all walks of life gathered to support the grieving families and demanded answers for the flight that was shot down in Ukraine on Thursday.

They started a page on Facebook on Friday to invite friends and family.

Von said she wanted the world to understand that the disaster was a global issue.

"It is not a problem between Russia, Ukraine and Malaysia, this could happen to anyone. It is time we put a stop to incidents like these," said Von.

Spotted at the memorial service was Ng Kai Chan, 47, the cousin of victims Mona and Gary Lee.

Ng said she was devastated upon hearing the number of children involved in the plane crash.

"It is sad that my cousin and her husband perished, but it hurts me more to know so many young lives were also lost," said Ng.

She stressed that she needed to know the truth behind the "massacre".

Noted activist Hishamuddin Rais in his speech, urged the Government to reveal the findings of the investigation.

He said Malaysians would not tolerate the same secrecy that shrouded the disappearance of MH370 four months ago.

A number of parents also decided to bring their young children to the service to instil in them the importance of empathy.

Joey Tai, 48, a remisier, brought along three of his teenage children.

"Although we did not lose anyone in this incident, we felt they needed to experience the sadness the victim's families are going through," he added.

During the memorial service, travelling Ukrainian singer and songwriter Onischenko Sengey, 26, performed a song about peace titled Hide and Seek.