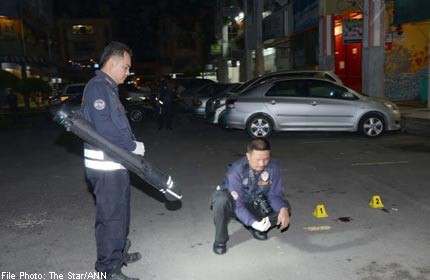 Resort developer Tiong Choon Kwong was gunned down at the bustling Beverly Hills commercial complex near Kota Kinabalu on Aug 5, 2013.

MALAYSIA - An opposition politician in Malaysia has been criticised for saying that the ruling Barisan Nasional government is deliberately allowing crimes so that preventive detention laws could be brought back.

Sarawak Democratic Action Party (DAP) chief Chong Chieng Jen is alleged to have made such a statement during a press conference on Monday, liberal news portal Malaysian Insider reported.

His words were in response to an alarming spate of violent crimes and robberies in recent months.

More than a dozen shootings and robberies have been reported in states, including Penang, Perak, Johor and Negeri Sembilan and the capital Kuala Lumpur, according to news reports.

Most of the victims, some of whom were businessmen, were shot at close range as their cars idled at traffic lights or while they were at carparks and food courts.

Sarawak state police chief Acryl Sani Abdullah blasted Mr Chong for his remarks: "This kind of statement should not come from a man of Chong's stature and standing.

"The public must do away with the thinking that preventive laws benefit the police. They are for the safety of the public, not for the ease of our job.

"Though we are the police, we are also part of the society at large. It is also our wish to have a safe society."

He added that the suspects in the recent cases are mostly former detainees under the Emergency Ordinance (EO).

He said: "The non-governmental organisations and the opposition had been calling for the law to be abolished.

"With the abolishment of EO, all those detained under EO were released. And now, the opposition is blaming the government for the rising crimes. This does not make sense."

"Chong should speak and behave like a parliamentarian rather than as a publicity seeker," he said.

"The statement by Chong is both irresponsible and malicious. DAP is trying to spin the issue and place the blame on the government and police," he stressed.

DAP secretary-general Lim Guan Eng said that though the rise in shootings in Malaysia can be attributed to the repeal of the EO, the same excuse cannot be used to explain away the apparent availability of firearms, Malay Mail reported.

"Only police omnipresence can deter criminals and bring down the crime rate," Mr Lim, who is also the chief minister of Penang, said in a statement on Wednesday.