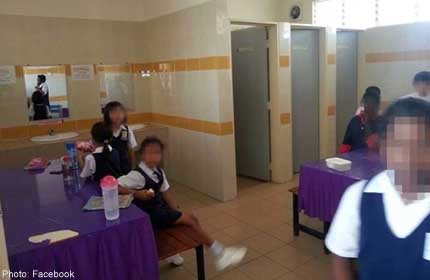 PETALING JAYA - The woman who uploaded photographs of SK Seri Pristana pupils eating in the changing room has transferred her daughter out of the school.

"The parents have to send the transfer letter to the ministry," said Mohamad Nasir.

He added that since it was a transfer from a national to a vernacular school, the district education office could not process it.

Commenting on an online portal report that Guneswari's decision was made after her daughter was allegedly shamed during school assemblies and subjected to racial slurs, he said he had not heard of that happening in the school.

"As far as I'm concerned, no bullying has happened in our school," he said.

He added that the other pupils might have been subjected to teasing from outsiders but that "this was not under his control".

When contacted, Deputy Education Minister P. Kamalanathan said that he was aware that the parents were transferring their daughter out of the school.

"Yes, I've heard about it and I'm sure the parents would not make this decision lightly. They must have their reasons.

"However, my office is always open for anyone with queries and in need of assistance," he said.

Last month, there was a social media uproar after photographs of pupils eating in a makeshift canteen in the changing room next to a toilet went viral.

Since then, it was reported that Guneswari had received kidnap threats.

Mohamad Nasir claimed that he had also received death threats, adding that this was a difficult period for him.

School Parent-Teacher Association (PTA) chairman Hussein Mohd Ariff denied that he had received any call or text from Guneswary Kelly claiming that her daughter was harassed.

"I only spoke to her husband, whom I know as Mr Raj.

"He was supposed to meet me but could not make it as the meeting was scheduled on a weekday. "We had agreed to meet after the school holidays.

"It is only now, that I am hearing of this issue," said Hussein.