Muslim convert has no problems living with parents

PASIR GUDANG - Blood is thicker than water for Azura Tan, whose bond with her parents continues to be strong despite them practising different faiths.

Azura also makes sure that she - along with her two siblings and their children - celebrate Chinese New Year with their parents at her house in Taman Bukit Rinting near here.

"We have no problems living under one roof despite all of us practising different faiths,'' she said in an interview.

The mother of three daughters, aged 16 to 23, converted to Islam after meeting her second husband, Pakistani Rafaqat Ali, 38, in 2011. 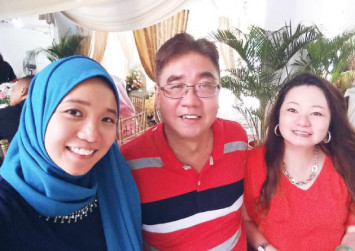 Her first marriage ended in divorce in 2004 when her first husband, who is also the co-owner of their bakery shop in Bandar Seri Alam, converted to Islam and married one of the shop's assistants.

"I remained a single mother for about 15 years, raising my three daughters before deciding to remarry after meeting my second husband,'' she said.

She said she remained on good terms with her ex-husband, who runs a catering business in Kedah and who would occasionally drop in to visit their daughters.

Azura said she was fortunate to have parents who were understanding and compassionate and did not object when she told them that she wanted to convert to Islam.

"My siblings, nieces, nephews and relatives have no problems with me becoming a Muslim. My uncle in Singapore also conver­ted to Islam,'' she said.

In fact, her mother was the one who would often prepare the pre-dawn meals for her and husband every day during Ramadan for the past seven years, waking up as early as 3am, said Azura.

"Nothing beats mother's cooking and love,'' she said.

Sock Huay said her family was open-min­ded and as a mother, she was supportive of Azura's decision to embrace Islam.