'Muslim-only' launderette given a dressing down by Johor Sultan 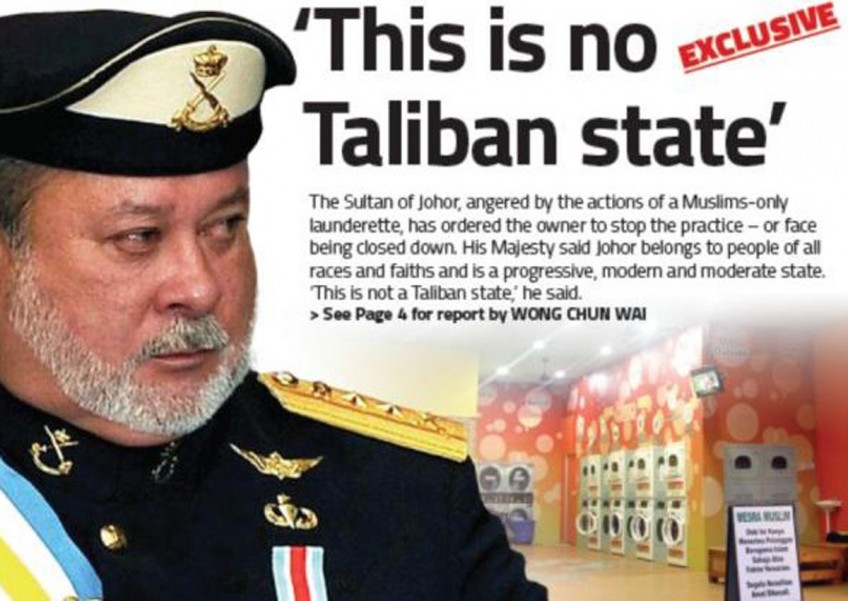 JOHOR BARU - The Sultan of Johor, Sultan Ibrahim Ibni Almarhum Sultan Iskandar, has ordered the controversial Muslim-only launderette in Muar to immediately stop its discriminatory practice or risk being shut down by him.

"I cannot accept this nonsense. This is Johor, which belongs to Bangsa Johor and it belongs to all races and faiths. This is a progressive, modern and moderate state.

"This is not a Taliban state and as the Head of Islam in Johor, I find this action to be totally unacceptable as this is extremist in nature," he said.

The Sultan added that he had also spoken to Mufti Johor Datuk Mohd Tahrir Samsudin as well as state exco for religion Abd Mutalip Abd Rahim over the matter.

"I want the owner to apologise to me and the people of Johor. He has made Johoreans very angry and embarrassed because this is not the Johor we want.

"The owner has gone against the vision of a united, harmonious, moderate and tolerant Johor. If he still insists on carrying on the Muslim-only practice, he can leave Johor. I suggest he set up shop in Afghanistan. His thinking is sick and goes against everything that Johor stands for."

His Majesty, who was visibly upset, said he and his family members were "deeply appalled" by the action of the launderette owner, saying if this was not stopped, it would lead to more narrow-minded actions in the name of Islam.

Pictures of the launderette went viral last week when it was reported that it had a sign saying that only Muslims were allowed to use its machines.

He said the owner had first put up his Muslim-only notices and after the issue became controversial, the owner put up a new sign to say it was "Muslim-friendly."

"Don't try to be clever. It's still the same. The owner needs to have his brains cleaned up.

"I want to put a stop to such extremism. Extremism has no place in my state. We take pride in being Bangsa Johor and I want to know where the owner of this launderette learn his Islam? Islam teaches the faithful to be tolerant and respect other people and faiths," he said at Istana Bukit Serene here yesterday.

On Monday, Johor Prince Tunku Idris Sultan Ibrahim expressed dismay over the launderette's move, asked: "Is this for real? I'm appalled" in his Instagram.

The Sultan said the mosques in Johor were open to non-Muslims, for example, as long as they were properly dressed and he could not imagine non-Muslims being banned from entering the mosques, saying he was concerned over rising religious extremism.

"I wonder where this launderette owner washes his clothes when he is overseas? Is he saying only the clothes of Muslims are clean and those of non-Muslims are unclean? That's what he means, I believe.

"From now on, I am directing the state executive council and all the councils to insist that any business owners who carry out such blatant discriminatory practices should have their licences revoked. Don't mess around with your narrow-minded religious prejudices."

His Majesty added that he could not keep quiet on the issue, as if this was allowed to go unnoticed, "then next we will have taxis for only Muslims or non-Muslims."

He said he also did not want other races to carry out similar actions.

The owner of the controversial "Muslim-only" launderette here has apologised for his actions and will obey Johor Ruler Sultan Ibrahim Sultan Iskandar's decree to remove a signboard limiting its services to those of the faith.

"I regret the issue and I will obey His Majesty's command," said the owner of the launderette in Taman Seri Cempaka, who refused to be named, adding that he immediately took down the sign Wednesday morning following the news published in The Star.

"I was not aware about it at first. I was only informed about Tuanku's comments after my friends alerted me and forwarded me the news article," he said on Wednesday.

Checks by The Star on Wednesday showed that the sign was no longer displayed at the launderette's entrance but remained open for business.