My dad isn't one to work for recognition, says Marina Mahathir

PETALING JAYA - While a petition lobbying for Tun Dr Mahathir Mohamad to be nominated for a Nobel Peace Prize has received more than 40,000 signatures on the day that it was launched, his daughter has said that the Prime Minister is not one who expects to be awarded for his efforts.

“It was really nice of them to do that (petition) but knowing my father, he is not a person who works hard for recognition or an award. So I don’t know what to say,” said Datin Paduka Marina Mahathir (pic).

“I really have nothing to add... my dad says he doesn’t deserve such a thing.” Marina told The Star.

The Change.org petition started by Alexandria Abishegam on Saturday garnered 40,525 signatures as of 7pm yesterday.

Dr Mahathir, said the petition, is like the “Nelson Mandela” of Malaysia. 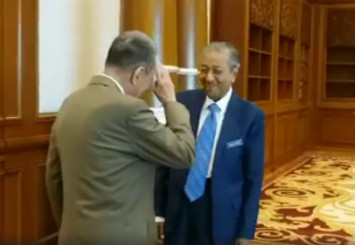 “The fact that Dr Mahathir has also openly admitted his own faults and apologised for his mistakes of the past makes him truly a ‘Giant of a Man’ and a leader to emulate,” the petition read.

It gave recognition of his determination to return to politics at the age of 93 and for casting aside his political prejudices to work with his former detractors for the purpose of saving the nation.

The petition also celebrated the Pakatan Harapan chairman for helming a peaceful transfer of power and specifically stating that the new administration was not out to “seek revenge” against the previous administration of Datuk Seri Najib Tun Razak.

Among the world leaders who have received the award are former US president Barack Obama (2009) for his work in strengthening international diplomacy and Presi­dent of Colombia Juan Manuel Santos Calderon (2016) for bringing his country’s 50-year-long civil war to an end.

Last year, the International Cam­paign to Abolish Nuclear Weapons, founded by Datuk Dr Ronald McCoy, was awarded for its ground-breaking efforts in achieving a treaty-­based prohibition of nuclear weapons.

According to the Nobel Foundation, a candidate is eligible for a Nobel Peace Prize as long as they are nominated by qualified nomi­nators.

These nominators must belong to specific categories such as members of national govern­ments, members of the International Court of Justice at The Hague, university professors, previous Nobel Peace Prize Laureates or members of the Norwegian Nobel Com­mittee.