Najib to be stripped of veto power over 1MDB's decisions 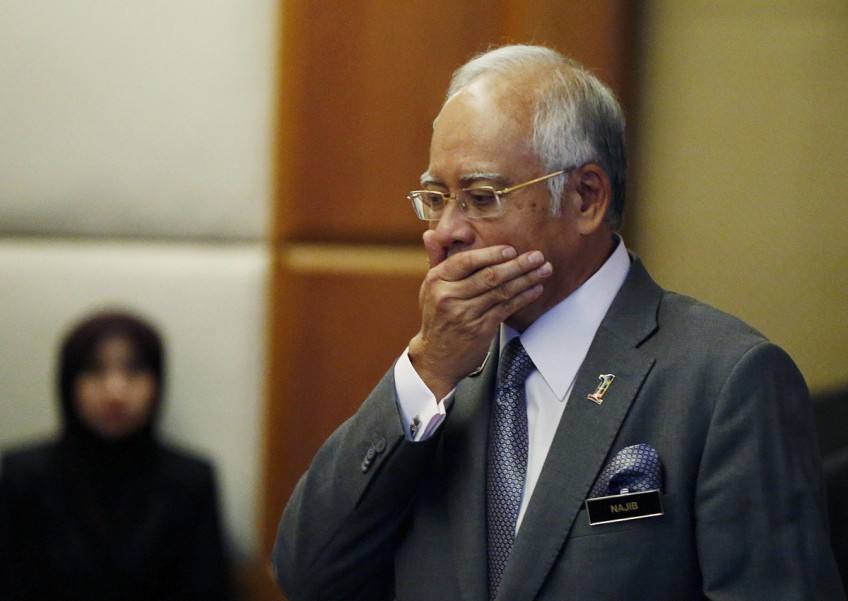 Najib Razak arrives at a presentation for government interns at the Prime Minster's office in Putrajaya, Malaysia.
Reuters

Malaysia's Finance Ministry has taken up the recommendations put forward by a parliamentary committee probe into troubled 1Malaysia Development Berhad (1MDB), including the removal of Prime Minister Najib Razak's veto power over major decisions by the state investor.

The ministry, which wholly owns 1MDB, yesterday also accepted the resignation of 1MDB's six-member board of directors who offered to quit en masse after the Public Accounts Committee (PAC) tabled its report in Parliament last month.

However, Mr Arul Kanda Kandasamy will stay on as 1MDB president to oversee its debt reduction plan and an RM17 billion (S$5.8 billion) dispute with Abu Dhabi's sovereign wealth fund.

"After a detailed study and due deliberation, MOF Inc has agreed to fully implement the various recommendations contained in the Public Accounts Committee report on 1MDB," the ministry said in a statement, referring to its corporate holding body, Minister of Finance Incorporated.

The move also means that 1MDB's advisory board chaired by Datuk Seri Najib will be dissolved and the controversial Article 117 in its Memorandum and Articles of Association (M&A) removed. Article 117 gives the Prime Minister ultimate authority.

In its report, the bipartisan PAC said 1MDB's management acted against the board of directors' instructions on several occasions. The management did so by citing conflicting directives from the chairman of the advisory board, who is Mr Najib, as well as the need under Article 117 for the Prime Minister's written approval to undertake significant personnel and financial decisions.

In addition, the ministry accepted the PAC's recommendation to change all references in the M&A from "Prime Minister" to "Minister of Finance".

But as Mr Najib is also the Finance Minister, he will still have the final say on appointments of directors and senior management.

This means new directors, whom the ministry said yesterday will be appointed "in due course", will be approved by Mr Najib, who has faced calls to resign over 1MDB's financial troubles.

Those calls mounted following media reports last July that US$700 million (S$948 million) had been deposited into Mr Najib's personal accounts via companies linked to 1MDB. But the Prime Minister and 1MDB have denied that the money came from the state firm.

The ministry said it would also transfer the ownership of 1MDB's land banks, including prime developments such as Bandar Malaysia and the Tun Razak Exchange, to MOF Inc.

It is not clear how 1MDB might be compensated, given that land sales form a key part of its plans to retire its RM51 billion debt.

A 60 per cent stake in Bandar Malaysia, a 196ha township just south of Kuala Lumpur, has already been sold to a China-controlled consortium.