KUALA LUMPUR - A challenge will be made against two civil applications brought by the government to forfeit RM133 million (S$43.7 million) in cash, jewellery and other luxury items seized from Datuk Seri Najib Razak, his wife Datin Seri Rosmah Mansor and 16 others, which were said to have been bought using money from 1Malaysia Development Bhd (1MDB).

"We have yet to receive notices with regard to the applications.

"But we will immediately file a challenge against the forfeiture applications the minute notices are served on us," Najib's defence lawyer Tan Sri Muhammad Shafee Abdullah said when contacted yesterday.

He described the forfeiture bid as "unfair and a rush job" by the government and police as the case against his client has yet to be adjudicated.

"The case is still ongoing and yet they are filing the forfeiture applications."

He was commenting on the two notices of motion and supporting affidavits which were filed by the Attorney General's Chambers (AGC) at the High Court registry here on Tuesday.

Meanwhile, Najib, in his Facebook posting, claimed that the move is an indication that Pakatan Harapan government does not want to return the seized assets as it would prove his innocence.

"If they return them, of course the action will confirm that Najib is not corrupt and did not purchase the items using 1MDB money or ill-gotten monies. 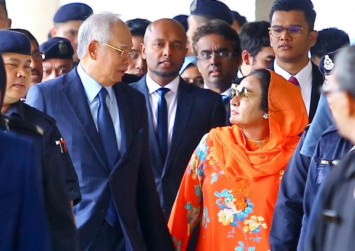 "That is why they are now using civil forfeiture action, instead of criminal proceedings, to avoid returning the items," Najib said in his post.

The two notices of motion and supporting affidavits seek to gazette a notice inviting third parties to show cause why the said properties should not be forfeited.

The date of hearing is yet to be fixed.

Ng Chong Hwa is also known as Roger Ng, a former Goldman Sachs banker who is claiming trial at a New York court over the 1MDB scandal.

Goh is the mother of fugitive financier Low Taek Jho, or Jho Low.

A third company, Obyu Holding Sdn Bhd, is the sole respondent in a second notice of motion which was filed separately.