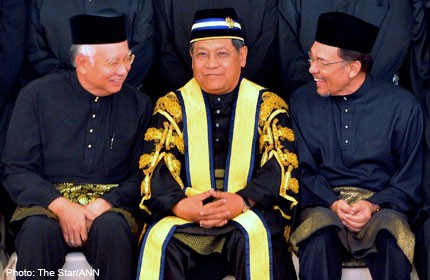 MALAYSIA - Malaysia's Prime Minister Najib Razak last Friday denied that he had made overtures to Datuk Seri Anwar Ibrahim and his camp to form a "unity" government, saying the opposition leader was imagining things.

But Mr Nik Nazmi Nik Ahmad, spokesman for Mr Anwar's Parti Keadilan Rakyat (PKR), insisted that the overtures through former Indonesian vice- president Jusuf Kalla did take place. He said Datuk Seri Najib might be under pressure from his own party to deny them.

The strongly worded statement from the Prime Minister's Office (PMO) was released after several online news media last week quoted Mr Anwar as saying he had met Mr Najib, and the PKR leadership was offered five posts in government, including that of deputy prime minister.

The PMO statement said: "The report that quoted opposition leader Datuk Seri Anwar as confirming there was an effort by Datuk Seri Mohd Najib to form a unity government is a 'political statement that is meant to be mischievous'."

It said the Prime Minister will not make such overtures to the opposition as long as the opposition does not accept the results of the May 5 general election.

Mr Najib and his ruling Barisan Nasional coalition managed to cling on to power, but the opposition claimed mass cheating.

Asked about the denial, Mr Nik Nazmi said PKR's leadership was briefed about the overtures a few days ago, and the leaders of its allies - Parti Islam SeMalaysia (PAS) and Democratic Action Party - have been informed.

Mr Anwar did not say whether he had accepted or rejected the overtures.

But if history serves any lessons, do not hold your breath for a unity government.

The last time it happened was in 1974, when PAS joined the ruling Alliance Party that later changed its name to Barisan Nasional. This was when Umno was weakened following the 1969 deadly racial riots. PAS left the coalition in a huff four years later.

Whispers of efforts towards a "unity government" have been making the rounds since the May general election, when the BN held on to power but lost the popular vote.

The rumours included Umno and PAS leaders supposedly talking about being coalition partners.

"The 'unity talks' come around when one party or another is not strong, or they believe it is the only way to form a government," said Associate Professor Sivamurugan Pandian of Malaysia Science University. He said he doubted that Mr Anwar would accept the post of deputy prime minister.