Najib: From holding top office to being in the dock

PETALING JAYA - At 10am on April 3, 2009, Datuk Seri Najib Razak took his oath of office as Malaysia's sixth prime minister before the King at Istana Negara.

At 2pm tomorrow - exactly 10 years later to the day - Najib's trial in the country's biggest ever corruption scandal will start at the Kuala Lumpur High Court.

In a decade, Najib has gone from holding the top office in Putrajaya to entering the dock for the start of his widely anticipated trial.

On Twitter, "Najib" was among the most popular topics among Malaysian users yesterday. 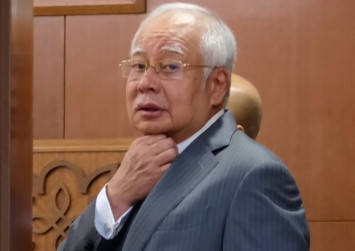 Among Twitter users in Kuala Lumpur, "Najib" was the second most popular topic, behind "April Fools" in first place but well ahead of "Mahathir" in seventh spot.

On Google Trends, a website that studies the popularity of top Google search queries, the 12-month popularity of the search term "Najib trial" peaked on Feb 10-16 this year.

Najib's trial was originally set to start on Feb 12, but on Feb 11 the Court of Appeal ruled in favour of a stay application by the former prime minister's lawyers to postpone it.

However, a seven-man bench chaired by Chief Justice Richard Malanjum lifted the stay in the trial last Wednesday.

The popularity of the "Najib trial" then fell on Google Trends, but has been gathering steam again over the past few days.

Also gaining traction in recent days is an online petition in www.change.org calling for Najib's trial to be aired live on television.

The petition, started by an individual named Karim Yasin nine months ago, has gotten more than 46,000 signatures as at 6pm yesterday, up from 40,000 the day before.

Among others, it stated that this case was of public interest and it would help ensure all proceedings in court would remain transparent.

Najib himself is in favour of a live broadcast.

"I will support the 'live' broadcast because it will help transparency and ensure the rule of law is followed.

"The rakyat have the right to know the truth," Najib wrote on his Facebook page on Sunday.

On that same day, Deputy Prime Minister Datuk Seri Dr Wan Azizah Wan Ismail said it was up to the courts to decide whether to broadcast the trial.

"We understand the people want to know the process of the trial but we don't want to make it (into) a circus ... let the law take its course," said Dr Wan Azizah.