He said the former prime minister is "still adamant" in defending that 1MDB is "good for the nation" and can be "profitable".

"I feel that he is in a world of his own or in a different universe," he told reporters at Parliament lobby Wednesday (Nov 14).

Lim was asked to comment on Najib's debate on the Budget 2019, where he stated that 1MDB could reap profits if its assets were managed well.

Najib claimed that the documents would show that IPIC has till Dec 31, 2020, to repay money owed to 1MDB. 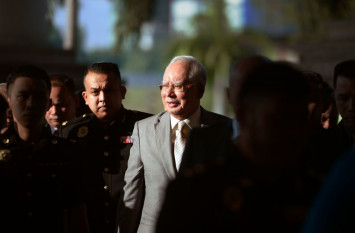 On this, Lim said that Najib was currently facing corruption charges and it would be subjudice to release such documents.

"We have no problems with releasing the documents but we also have to abide by the advice given by the Attorney-General.

"I am sure when the time comes in court, the truth will be known," Lim added.

On Sept 20, Najib was slapped with 25 charges of graft and money laundering relating to transactions amounting to RM2.3bil that are linked to 1MDB.

The former prime minister denied the charges and claimed trial.