Najib quits as chief of Barisan Nasional and Umno

"Seeing that Umno and Barisan met with a heavy defeat, I, as Umno president and Barisan chairman, have taken the decision to resign my posts immediately.

"According to principle, anyone who is the head of a party defeated in an election has a moral duty (to step down) and this must be accepted by the person," he said.

Najib announced his decision after Umno's political bureau meeting and said the duties of the Umno president would be carried out by Datuk Seri Dr Ahmad Zahid Hamidi.

Najib said he would remain in the party and continue to support it.

He urged party members to give their full support, co-operation, and trust to the new leadership. 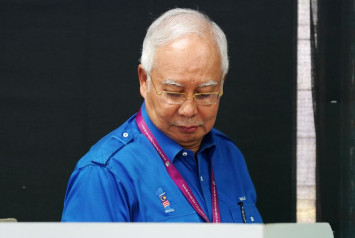 Umno, said Najib, will take the defeat as a time to reflect and improve the party.

"I believe the contribution of Umno and Barisan to the country for the past 60 years was huge.

"We are sad about what has happened, but as a party that holds to the democratic principle, we accept this with open hearts," he said.

Najib also claimed Barisan's loss was due to public perception.

"It is more of a question of perception than reality, those that won the war on perception, gained the support of the people," he said.

Dr Ahmad Zahid and Hishamm­uddin, who flanked Najib, both took turns to hug him after the press conference. 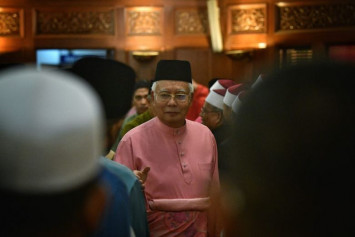 Earlier in the day, crowds gathered as early as 6am at the Sultan Abdul Aziz Shah Airport in Subang to "prevent" Najib and his wife Datin Seri Rosmah Mansor from leaving the country.

Their purported flight itinerary to Indonesia on a private jet was leaked online the night before.

Najib had also posted on his Facebook page that he would be taking a short break to spend time with his family "whom I have not seen enough of in recent years".

Later in the day, the Immigration Department announced it had blacklisted the couple from travelling overseas.

Najib then issued another statement on Facebook saying he respected the order and would remain in Malaysia with his family.