Najib spent S$152,000 for a luxury watch as a birthday gift to Rosmah

A photo taken on Oct 4, 2018, shows Malaysia's former prime minister Najib Razak and his wife Rosmah Mansor leaving the Kuala Lumpur Courts Complex, where they both appeared in separate courts.

"The purchase at Chanel in Honolulu was a watch that I bought as a gift for my wife's birthday in December, " he said here on Monday (Dec 9).

The 66-year-old Pekan MP said this during an examination-in-chief at the SRC International trial when he was asked by his lawyer Rahmat Hazlan about two controversial transactions through a credit card.

Read Also
Najib: I only knew about $1.4 billion in my bank account after MACC took my statement 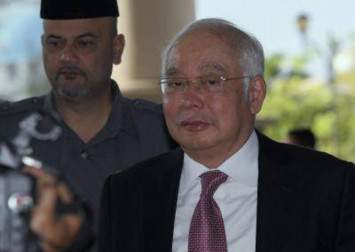 "Regarding the Shangri-La transaction, just after my trip to Kota Bharu to check on the flood situation there, I continued my private vacation in Bangkok, Thailand where I flew to straight from Kota Bharu.

"Although this was a private trip, I took the opportunity to meet with my Thai counterpart, (Thailand's Prime Minister) Prayut Chan-o-cha, to discuss how the Thai government would be able to help us with the bad flood situation, " he said.

Mr Najib added that the money spent at the Shangri-La covered his stay as well as that of the supporting staff that accompanied him, unexpected expenses and required expenses throughout the trip.

"It is within my right to claim the expenses from the government considering that I worked on my trip."

"However, I chose to bear the expenses because I didn't want to complicate matters and I exercised my discretion, " he said.

Mr Najib, who was reading from his 243-page statement, said he was meticulous about expenses.

"My lawyer had prepared a breakdown of the funds used in the account including the credit card expenses from August 2013 until March 2015.

"The total of my personal spending was 0.4 per cent from the funds received in the account, " he said.