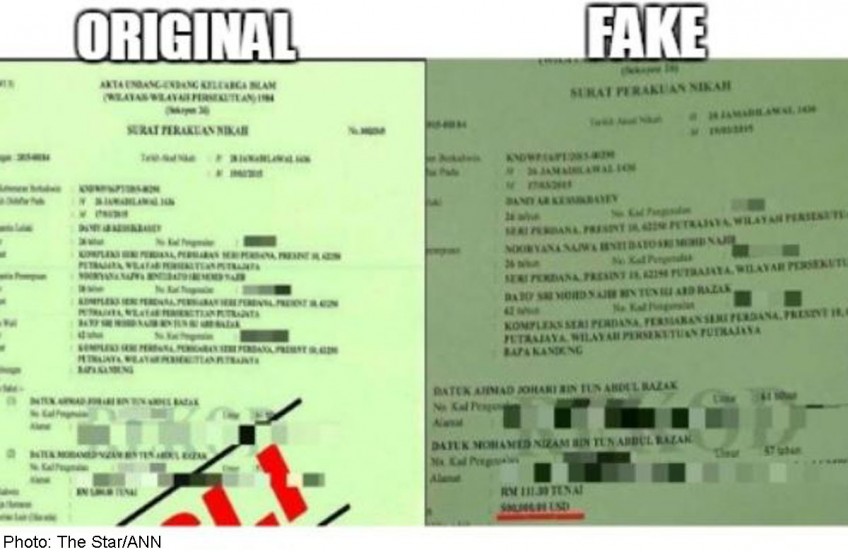 In a statement, Jawi director Paimuzi Yahya said the image of Nooryana Najwa's marriage certificate that went viral on social media was "fake" as the original document only detailed the amount of mas kahwin (dowry).

"We would like to stress that the marriage certificate was fake. This is because the amount of the dowry and the wedding gift is not true.

"The (fake) certificate was also not signed by Jawi's marriage registrar," said Paimuzi.

The copy of the original certificate, which was made available by Jawi, indicates that Nooryana Najwa received RM5,000 (S$1,858) as a dowry.

However, the wedding gift column was left blank.

An image of the purported Nooryana Najwa's marriage certificate had gone viral on social media a few days before her wedding, alleging that she would receive US$500,000 as a wedding gift.

The 27-year-old wed Kazakh national Daniyar Kessikbayev, in a solemnisation ceremony conducted by Najib at Seri Perdana on Thursday night.

Najib and his wife Datin Seri Rosmah Mansor, together with Daniyar's family, will hold wedding receptions in Kuala Lumpur and Pekan, Pahang at the end of this month.