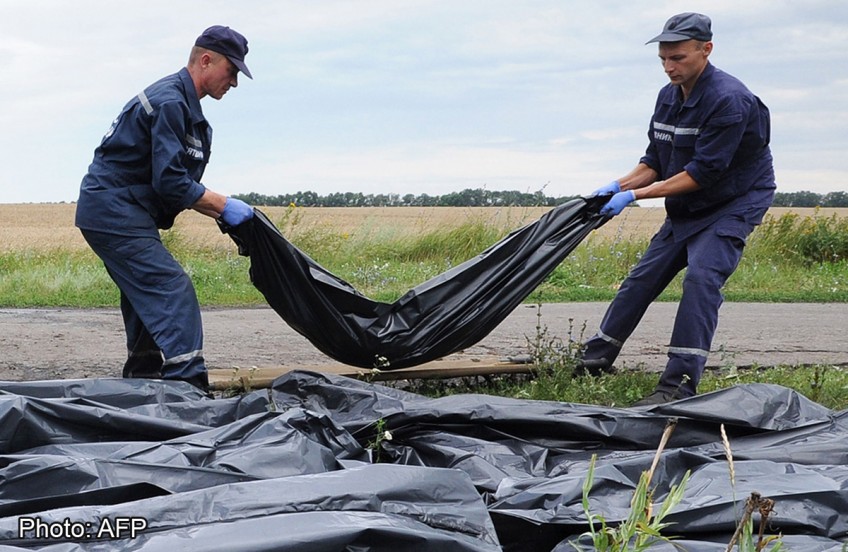 KHARKIV - Bodies recovered from the crash site of Malaysian flight MH17 will be flown to the Netherlands Wednesday as the country mourns 193 citizens killed in what US officials said was a "mistake" by pro-Russian separatists.

Flags will fly at half mast on a day of national mourning in the Netherlands, the origin of the doomed flight to Kuala Lumpur that was allegedly blown out of the sky by a missile, drawing victims from 10 nations into a remote conflict raging in eastern Ukraine.

Two black boxes recovered from the flight have been handed to Dutch experts leading the investigation and will be sent to Britain for the data to be downloaded, the Netherlands government said.

The recovery of the crucial flight recorders and the victims' remains came after days of bitter wrangling with pro-Russian separatists controlling the crash site, who finally released them under intense international pressure.

Evidence gathered by US intelligence officials suggests separatists launched the SA-11 surface-to-air missile that blew up Malaysia Airlines flight MH17 on Thursday, but it remains unclear "who pulled the trigger" and why.

"The most plausible explanation... was that it was a mistake", and that the missile was fired by "an ill-trained crew" using a system that requires some skill and training, said a senior intelligence official who spoke on condition of anonymity.

The intelligence official cited previous incidents over the years in which both Russian and US forces have mistakenly shot down civilian airliners.

A Korean airliner was downed by a Soviet fighter jet in 1983, and US naval forces mistakenly shot down an Iranian civilian passenger plane in 1988.

"We've all seen mistakes in the past," the official told reporters.

Russia, which US officials accuse of backing the separatists by providing them with military hardware and training, has faced a hail of international condemnation over the accident.

The crash has spurred an intense propaganda war, with both Ukraine and Russia trading blame, ratcheting up tensions after months of crisis sparked when Kiev turned its back on its former Soviet master in favour of stronger European ties.

Russia - which annexed Crimea after the ouster of ally Viktor Yanukovych by pro-EU protesters - denies supporting the rebels who have declared independence in parts of Russian-speaking eastern Ukraine that don't support the pivot westwards.

A senior security official in Kiev claimed that Russia had massed over 40,000 soldiers along its border over the past week.

US intelligence officials said they chose to brief reporters partly to counter what they called "misinformation" from Russia and its state-controlled media over the incident.

The US officials said Russian claims the Ukrainian government had shot down the plane were "not plausible".

'Human remains not picked up'

A truce has been declared by rival sides around the crash impact site, but international investigators still face massive obstacles. Only 200 of the 298 victims' remains arrived in the government-controlled city of Kharkiv - about 80 less than promised.

International monitors have said more remains were left decomposing under the sweltering summer heat in the vast crash site, littered with poignant fragments from hundreds of destroyed lives.

"There were human remains that had not been picked up," said Michael Bociurkiw, a spokesman for European security body OSCE's mission to Ukraine after visiting the impact site.

Just beyond the crash site, fighting raged on Tuesday as government troops pushed on with an offensive to wrest control of east Ukraine's industrial heartland from the pro-Moscow separatists.

Local authorities in the besieged cities of Donetsk and Lugansk reported Tuesday 10 civilians killed in 24 hours, and Ukraine's military said 13 soldiers had died.

Around 1,000 people have been killed in the 15-week conflict, including the victims of the plane crash.

Russian President Vladimir Putin on Tuesday pledged to "do everything" to influence the separatists and ensure a full probe into the crash.

At the same time, he put the ball back in Kiev's court, saying that the Ukrainian military offensive in the east was posing a danger to international investigators there.

"We are asked to exert influence on the militants of the south-east (of Ukraine). Of course we will do everything in our power.

"However this would be absolutely inadequate" given fresh attacks by Ukrainian troops, he said.

Putin is staring down fresh European sanctions just a week after the latest set was unveiled over its role in the Ukraine crisis, which has chilled East-West tensions to the lowest point in years.

The emerging giant is widely expected to sink into recession this year, hit by massive capital outflows over the Ukraine crisis.

But more pain could still come as Britain is pushing for an arms embargo.

Britain's stance is, however, putting neighbour France in an awkward position, as Paris is keen to maintain its 1.2 billion euro ($1.6 billion) warship deal with Russia.

French Foreign Minister Laurent Fabius told Britain to first put its house in order, pointing out that London was full of "Russian oligarchs".

Washington weighed into the debate, telling France pointedly that the delivery of Mistral-class warships to Russia would be "completely inappropriate" given the West's misgivings about Moscow's role in Ukraine.