'New bumiputra policy will be carried out fairly': Najib 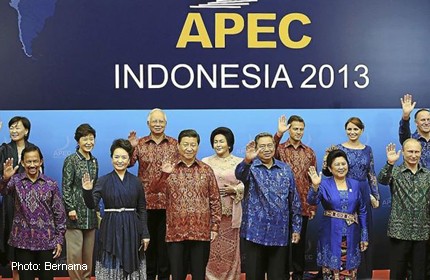 Malaysia's latest bumiputra empowerment policy is designed to help improve the economic standing of the country's Malays and other bumiputras without neglecting the rest of the citizens, says Prime Minister Datuk Seri Najib Tun Razak.

"Over 65 per cent of the country's bumiputras, most of whom are Malays and the non-Muslims in Sabah and Sarawak, are marginalised. This problem of economic disparity can lead to instability.

"This new bumiputra policy is not the same as the one done in the past. It will be implemented in a fairer and market-friendly manner, whereby strong attention will also be given to help the non-bumiputras," he said during a dialogue at the Apec CEO Summit held in conjunction with the Asia-Pacific Economic Cooperation (Apec) Leaders Summit here yesterday.

Mexico president Enrique Pena Nieto also attended the talk with Najib to discuss the role of governments in facilitating investment and human capital.

"Once you go beyond that (into TPP), you will go into the areas of intellectual property, government procurement and labour.

"So you impinge on the sovereign rights of Malaysia. That's why we ask 'let's not fix a timeline'," he added.

To a question from a participant from China, Najib said that the Government realised that education was the key to human capital.

"When we launched the National Education Blueprint for 2013 to 2015, we thought that the end results of our educational policies should be given strong attention.

"I'm a great believer in the outcome of a policy that we implement. Although Malaysia has invested heavily in education, we need to do more especially in Science and Mathematics if we want to be competitive," he added.