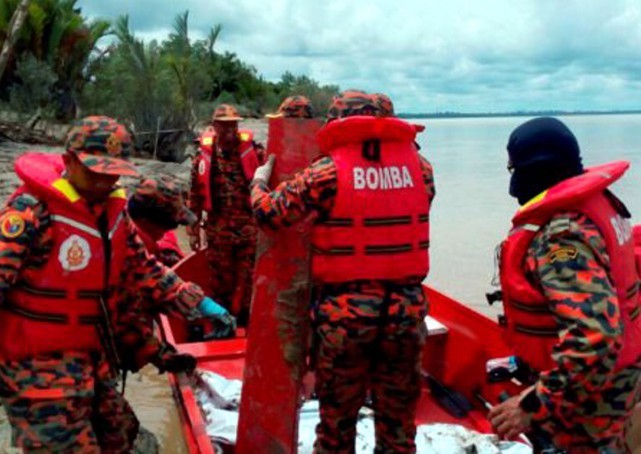 New debris believed to be from the Sarawak helicopter that crashed and killed a Malaysian deputy minister has been discovered near the Batang Lupar river, where other wreckage from the chopper were earlier found, authorities said on Sunday (May 8).

Malaysia's Department of Civil Aviation (DCA) director-general Datuk Seri Azharuddin Abdul Rahman said the discovery was made near Pulai Triso at the river estuary of Batang Lupar in Sarawak at about 9.45am on Sunday by the Malaysian Maritime Enforcement Agency (MMEA).

"We found a helicopter cushion near Pulai Triso and a helicopter's tail boom at Sungai Merah, some 4km northeast from Lingga," he told a press conference at the DCA headquarters here on Sunday.

He said the search and rescue operations would be focused around the Sebuyau and Lingga area near the Batang Lupar river, stretching across 875km, to locate the last missing victim in the helicopter tragedy. "The operations will continue until we know the real reason behind the incident," he said.

Azharuddin added the relevant authorities would not use sonar system but metal detectors throughout the rescue mission to find the wreckage of the helicopter. "If we pick up any signal of metal in the river, we will immediately deploy the divers," he said.

A total of 650 officers from various agencies are involved in the search and rescue operations.

He also denied allegations circulating on social media that there was an over capacity of passengers during the helicopter ride. "Anything that is mentioned in social media will remain as speculation. Let the relevant investigative bodies that is led by DCA's accident investigations head Captain Yahya Abdul Rahman to handle the matter," he said.

"We urge the public to stop making any further speculation that could hurt the feelings of family members," Azharuddin said.

Six people were on board the helicopter which was flying from Betong to Kuching on Thursday when it crashed near Batang Lupar.

The search is on for the final victim - Filipino pilot Rudolf Rex Ragas.