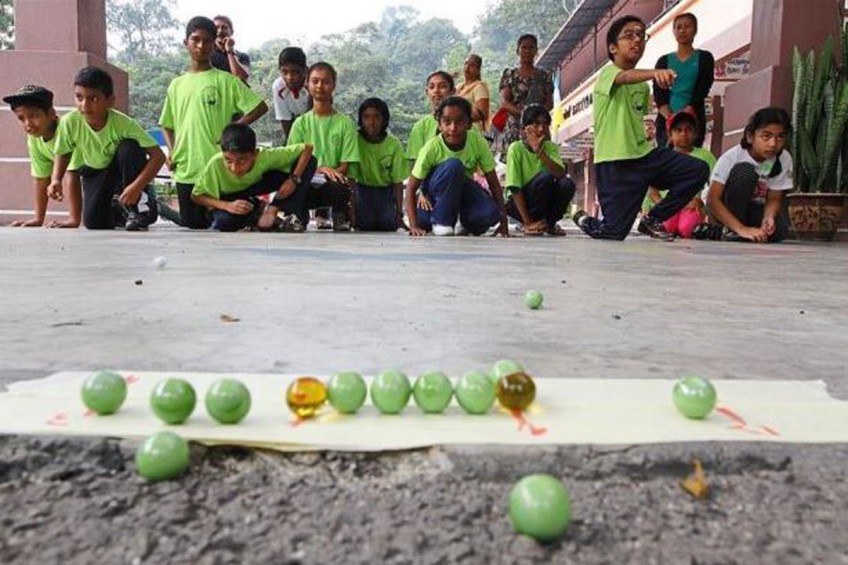 Eye on the ball: Children from the Penang Suya Meiyarivagam Society playing a marble game during an annual gathering organised by the centre at SJK (T) Azad in Jalan Kebun Bunga, Penang.
The Star

GEORGE TOWN: Like many children his age, J. Parthasarathe enjoys playing games on the computer, tablet or smartphone but has now found a new interest - playing traditional games.

"This is my first time playing these games. I enjoy the seven tins the most. It feels like a simple game of bowling.

"Although I still enjoy playing the games on my tablet and phone, these games give me a different kind of excitement as I get to interact with my friends. We also compete to get the highest score," he beamed.

His sister, J. Bhogatharani, 14, said she was glad to be exposed to playing traditional games which she described as a dying trend among the young generation like her.

"I like how my brother and I are gathering with our friends here to play these games that are so simple yet filled with so much fun.

"These games are very interactive and I understand why now they are favourite pastimes among the older generation last time," she added.

The siblings were among 120 students, aged between six and 18, from the Penang Suya Meiya­riva­gam Society who participated in the event at SJK (T) Azad in Jalan Kebun Bunga here yesterday.

Penang Suya Meiyarivagam is a 16-year-old non-governmental or­­ga­­nisation based here which aims to inculcate and inspire moral and spiritual values, social responsibility and holistic development of children, youth and the community as a whole through continuous and sustainable education.

Its president N. V. Subbarow said the event was held in conjunction with the centre's annual gathering this year.

"This year, we decided to make traditional games as part of our theme because we want the children to recognise the importance of these games that are able to train them to think critically as they involve a lot of strategising and are mind-challenging.

"These days, children prefer playing games on their gadgets and we want to ensure that they find joy too in these traditional games that also teach them patience, concentration and teamwork," he said.

The students, who were divided into 10 teams, had to play different games in eight stations to accumulate points for their team. The games were paandi, seven tins, blindfold, kalangai (seven stones), congkak, thayam, walk with bricks and marble.

Facilities manager T. Rajan, 39, who brought along his two children, said he was glad the centre held the event.

"It brought back many childhood memories for me and a good way to expose my children to these much-loved traditional games," said Rajan, one of the 20 volunteers who helped out with the event.