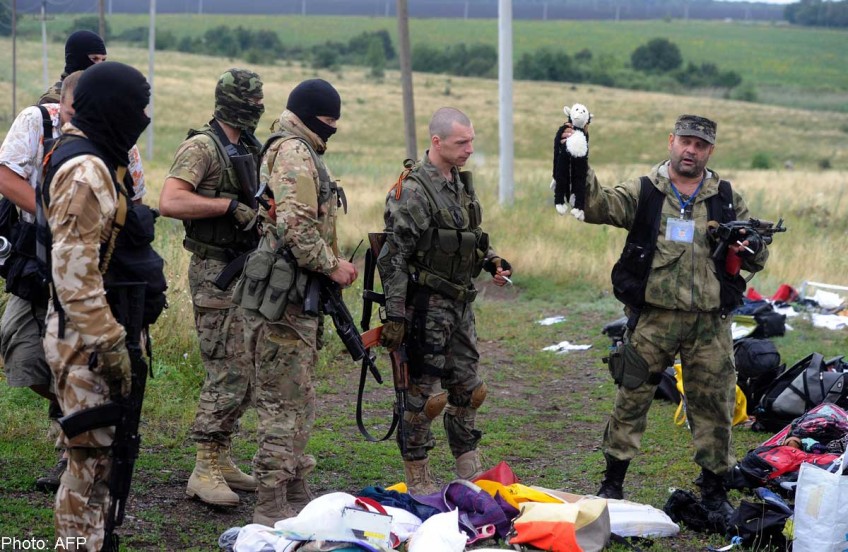 A pro-Russia militant holding up a stuffed toy at the crash site in Grabove, in rebel-held eastern Ukraine, last Friday. Looters are reportedly taking items from the plane that was shot down last Thursday. Ukrainian rescue workers carrying the body of a victim past a piece of wreckage at the crash site in Grabove yesterday. Bodies scattered across a wide area have started decomposing in the summer heat.

GRABOVO, Ukraine - Uncordoned and largely unguarded, the huge crash site of Malaysia Airlines Flight MH17 is like an open bank vault - and looters are helping themselves, reports said.

The site - essentially rural fields - is in eastern Ukraine, a region now under the control of pro-Russian separatists fighting against Ukrainian government forces.

Neither international forensic workers who help secure and sort through the wreckage nor recovery crew personnel who identify and remove the bodies are on site, CNN reported. Instead, looters are rummaging through and helping themselves to items from the plane, after it was shot down by a missile last Thursday.

Guide books, pieces of luggage, mementoes, children's toys, books, passports, jewellery and other personal effects are all for the taking.

A USA Today report described camera holders missing cameras and wallets missing cash. There were also backpacks and other carry-on luggage grouped together, all showing signs that they had been opened.

More worrying, however, are the bodies and human remains scattered across a wide area that have started decomposing in the summer heat. Residents complain of the pervading stench.

A small group of local government workers have been trying to do the best they can.

They have split up the crash site area in an orderly manner to look for bodies, CNN quoted freelance US journalist Noah Sneider as saying. When they find human remains, they mark the spot with stakes and tie white rags around them.

But despite their best intentions, they cannot cope with the numbers - there were 298 passengers and crew on the ill-fated flight.

"The longer (the site) stays unexamined, the more likely it gets contaminated, especially when there are people that aren't really familiar with accident scenes stomping all over it," said Dr Dell from Central Queensland University. "The longer that goes on, the more likely something you're looking for is either destroyed or stolen."

He cited the Lauda Air Flight 004 crash in Thailand in 1991, in which looters took away a critical component that was never found.

In the case of MH17, even getting to the crash site poses a problem, said CNN.

The 90-minute drive from the city of Donetsk must be made over potholed roads, which lead through a war zone, past checkpoints set up by varying local militias, it added.

A delegation of 21 monitors from the Organisation for Security and Cooperation in Europe (OSCE) made it in after assurances from rebel leaders, but local militiamen allowed them only a brief view of the site, said spokesman Michael Bociurkiw.

Separately, he told ABC News Radio that bodies at the site were already "starting to decompose in the fields", the SMH report said.

"It is astonishing to go there and this scene with no recovery going on," he was quoted as saying.

"It is a very, very gruesome scene and it boggles the mind that this could go on - we are going into day two or three now," he added.

The spokesman also said his team had been in contact with top Malaysian officials whose prime concern was that the bodies would be treated in a humane way.

"One immediate requirement would be refrigerated trailers - anything where these bodies could be moved - so they don't continue to lie there, exposed to the elements," said Mr Bociurkiw.

Another challenge for the team was finding a credible leader in the separatist-held area to establish the facts at the site.

Mr Bociurkiw said many of the separatists appeared "very aggressive", and under the influence of alcohol and possibly drugs.

He added that the OSCE team had access to the crash site for just 75 minutes before they were forced to leave, and that a gun shot was fired into the air as they left.

He said: "It basically looks like the biggest crime scene in the world right now, guarded by a bunch of guys in uniform with heavy firepower who are quite inhospitable."