PETALING JAYA - Designer handbags, branded shoes and jewellery were among items seized by police from a house in Precinct 10, said to be connected to Datuk Seri Najib Tun Razak.

According to a source, the items were similar to those seized earlier from the former premier’s official residence but “slightly older models”.

The house in Putrajaya was used like a storeroom to keep these older trends of luxury bags and shoes.

It is learnt that police are still estimating the value of the latest seizure.

The house is located about 200m from Seri Perdana, the official residence of the Prime Minister. An online portal described the premises as Najib’s “safe house”. 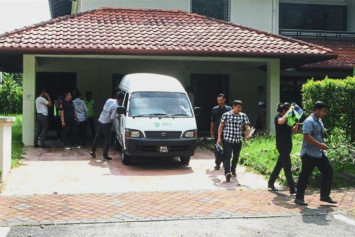 The search at 1pm on Monday is believed to be linked to the ongoing investigations into 1Malaysia Development Bhd (1MDB) and the Bukit Aman CID Anti-Money Laundering division officers had combed the house looking for related documents.

Several boxes were carted away from the house and placed in a white van.

It is learnt that the property management division of the Prime Minister’s Department owns the house.

The police team left at about 3.10pm but at least five personnel were left to guard the house.

Earlier, police had also searched another house in Precinct 11.

“We are looking into the aspect of money laundering,” he said.

He refused to say if other raids would be carried out.

Meanwhile, China Press reported yesterday that police had given an estimate for the 433 watches seized nearly a month ago from an apartment unit belonging to Najib and his family in upscale Pavilion Residences.

These include a Rolex watch valued at RM3.5mil (S$1.2 million), while another luxury Cecil Purnell timepiece was estimated at RM1.2mil.

The China Press said police officers were shocked when professional appraisers informed them of the value of the timepieces.