Only Malaysians can change the prime minister, says Mahathir

He reminded Tunku Ismail, who is popularly known as TMJ, that the latter's post was "not permanent".

"He thinks he is someone big, but he is just (someone) little. If he wants, vote lah to drop me. Only the people can change a prime minister with their votes.

"There was a time when the TMJ was changed and (the post was) given to his younger brother.

"So a TMJ can be replaced (but) a prime minister can only be changed by the people," Dr Mahathir told a press conference at the China World Hotel here yesterday.

He was responding to a question about a video recording of Tunku Ismail saying that the Prime Minister should be replaced.

In the video, Tunku Ismail was seen leaving Stadium Larkin after a football match in which Johor Darul Ta'zim went down 0-1 to Shandong Luneng in the AFC Champions League on Wednesday.

The vehicle ferrying him stopped when a fan shouted "Change Mora", in reference to the football club's coach Benjamin Mora.

Tunku Ismail, who was seen in the front passenger seat, then put his head out of the window and retorted: "Instead of changing Mora, it's better to change the Prime Minister."

Read Also
Johor Palace and government to 'iron things out' 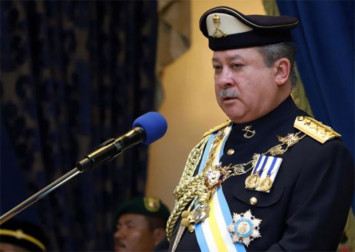 The relationship between Putra­jaya and the Johor royal family became rocky after the Pakatan Harapan government withdrew from ratifying the Rome Statute of the International Criminal Court earlier this month, with Dr Mahathir citing "confusion arising politically and within society".

He said one person, in particular, had created confusion over the matter because the person wanted to be "free to beat up people and things like that".