PUTRAJAYA - After making the Cabinet and Pakatan Harapan MPs declare their assets, the government now wants opposition lawmakers to do so too.

Requiring the opposition MPs to submit their list of assets to the Malaysian Anti-Corruption Commission (MACC) was among the decisions made at the Special Cabinet Committee on Anti-Corruption meeting chaired by Prime Minister Tun Dr Mahathir Mohamad yesterday.

"Because even the Opposition exercise some power, they have the power to criticise the government. So they also must declare their assets," he said when asked on the move.

Speaking to reporters, the Prime Minister said this would be initiated after the proposal had been brought to the Speaker of the Dewan Rakyat. 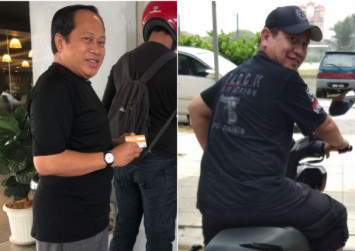 The Prime Minister as well as his deputy are also required to declare their assets.

The meeting also decided on a list of things to be made part of the ministers' Key Performance Index (KPI), including declaration of assets by officials in their ministry.

"The onus is on the minister to ensure the ministry's senior officials declare their assets to the MACC," said Dr Mahathir.

As part of their KPI, ministers are also required to come up with a gift policy for their respective ministry and see to its implementation.

Current ruling on gifts spells that only flowers and food below RM500 (S$164) can be accepted by the Prime Minister and his Cabinet.

Any gift that is worth more than RM5,000 can only be accepted with written permission from the Prime Minister.

Dr Mahathir said that as part of the KPI, ministers would have to oversee the creation of their ministry's anti-corruption plan and ensure it was successfully implemented.

Candidates considered for top posts in government-interest entities, including the position of chairman, chief executive officer and also board members, will go through specific screening, the meeting decided.

The Prime Minister said the prospective position holders would be screened by the MACC and Insolvency Department.

There will also be background checks on education and health, and their involvement in other companies.

The meeting also decided for a strong and effective mechanism to be in place for the process of issuing permits and licences by the Agriculture and Agro-based Minis­try.

The Prime Minister explained that the ministry had raised several issues that must be addressed, including quota abuse, leakages, food security and enforcement abilities.

"The committee has agreed that a few measures need to be taken, including amending several related laws, boosting manpower for enforcement as well as upgrading facilities to carry out enforcement work," he said.

The meeting also agreed for all government projects to be advised and evaluated by technical agencies such as the Public Works Depart­ment, to ensure decisions on mega projects are made transparently and with accountability.

"We don't want decisions on projects be made without taking into consideration the technical aspects. (Like) contracts worth RM55bil need to be checked whether we have the financial ability to do it," he said in an obvious reference to the East Coast Rail Link project.