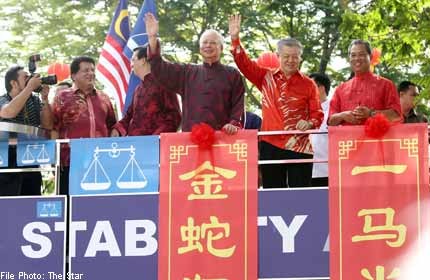 MALAYSIA - The Prime Minister's office has spent a total of RM44.071million (S$17.03 million) on overseas trips over the past five years.

Minister in the Prime Minister's Department Datuk Seri Dr Shahidan Kassim said the sum was recorded between 2008 and May this year.

Shahidan said this in a written reply to Nga Kor Ming (DAP - Taiping) who asked for the Prime Minister's expenditure for foreign trips over the past five years.

During a press conference at the Parliament lobby, Nga called on Prime Minister Datuk Seri Najib Tun Razak to explain the gains of the trips to justify the expenditure.

On another matter, Nga said he has written to Shahidan and Najib calling for the Chee Gaik Yap rape and murder case to be re-opened.

"In view of the public outcry and to seek justice for the late Chee, I hereby write and appeal for your immediate assistance to refer the matter to the Attorney-General's (A-G's) Chambers to re-open criminal investigations against the accused," Nga said in his letter.

Nga also urged for an appeal against the High Court's acquittal of the accused Shahril Jaafar on June 25.

Chee, a marketing executive, was raped and murdered in 2006.

Judicial Commissioner Zaki Abdul Wahab had ruled there was no evidence that Shahril had fatally stabbed his victim.