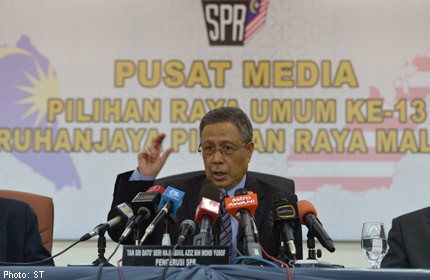 Pakatan Rakyat has applied to nullify the results of all 222 parliamentary seats due to the indelible ink controversy.

PKR's Subang MP Sivarasa Rasiah told reporters at the Parliament lobby that the suit was filed at the Kuala Lumpur court complex yesterday morning, with PAS and the DAP also named as plaintiffs.

In its suit, Pakatan claimed that the EC had "maliciously and dishonestly planned, designed, implemented and practised a massive fraud on the electorate by wilfully and deliberately allowing the indelible ink to be so diluted that it could easily be washed off so that dishonest voters could undertake multiple voting".

It claimed that the EC had "consistently adopted a partisan role, always favouring the ruling coalition, Barisan Nasional".

Pakatan claimed that thousands of voters lodged police reports stating that they were able to wash off the indelible ink from their fingers within hours of being marked.

As such, Pakatan sought, among others, a declaration that the defendants failed in their constitutional duty to properly conduct the 13th general election.

Meanwhile MCA deputy president Datuk Seri Liow Tiong Lai has questioned the Pakatan move. He said it was contradictory and came with a political agenda.

"They have already been sworn in (as MPs) and this showed that they accepted the election results.

"So what they are doing is actually contradicting what they have done," he said after a working visit to SJK(C) Chin Woo in Kuala Lumpur yesterday.