Pakatan Harapan to meet on Cabinet line-up; Mahathir says 'some heads will roll'

At his first press conference as Prime Minister, Dr Mahathir vowed that the heads of certain government departments will fall.

"The heads of certain departments must fall. We find that some people are aiding and abetting the former prime minister who was described by the world as 'kleptocrat'," he said told a press conference at a hotel here Thursday (May 10) night.

He said he would be convening a Pakatan presidential council meeting on Friday to discuss the new Cabinet line-up.

"(Tomorrow) we'll have a meeting because we need to discuss the formation of the Cabinet," he said. 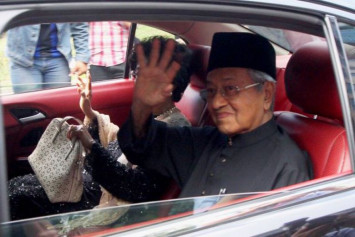 Dr Mahathir said that the meeting would consider all the views of Pakatan component parties on a number of issues, which includes policy decisions.

"It will be a very busy time. I will not be going back at 4am. I normally go back at 6am. But, maybe I'll have to extend to 7am," he quipped.

Dr Mahathir also said that the Pakatan-led Federal Government would review previous charges on political leaders, as some of these charges could have been politically motivated.

"We need to look if there is a case. If there is no case, we want to see how we can look at these cases based on the laws of the country."

He also said the new administration would review laws that are oppressive and unfair. He took his oath of office before Yang di-Pertuan Agong Sultan Muhammad V at the Istana Negara at 9.57pm.