PETALING JAYA - The two biggest parties in Pakatan Harapan have taken differing stances regarding the choice for its prime minister candidate.

While DAP wants a "clear direction" to be spelt out by PKR, the latter said it was unfair to force its president Datuk Seri Anwar Ibrahim to accept the choice of Tun Dr Mahathir Mohamad.

According to news portal Malaysiakini, DAP organising secretary Anthony Loke revealed that in recent weeks, Pakatan leaders had deliberated several options for the country's top two posts, where they came to a conclusion they were in favour of Tun Dr Mahathir Mohamad returning as prime minister with Datuk Seri Anwar Ibrahim serving as his deputy.

Loke, who said he was authorised by DAP to disclose details of the negotiations, also added that DAP, Parti Amanah Negara, Parti Warisan Sabah and MPs aligned with Tun Dr Mahathir Mohamad were in favour of the nonagenarian taking the helm of premiership once again.

Loke said PKR was supposed to arrive at a decision on Tuesday (June 16), but nothing has been communicated to them so far.

"There must be a clear direction of what is the way forward. It can't be neither here nor there... once we have a decision, then we can move on. That is DAP's position.

"We decided to speak (openly) Wednesday (June 17) because we want a decision. We want deadlines to be kept. We do not want any indecisive leadership in Pakatan.

"DAP is prepared to speak because the deadline passed on Wednesday.

"We have a responsibility to inform our supporters, MPs and members about what happened and DAP's position, " he said.

He added that Pakatan has consistently supported Anwar as the coalition's premier since Jan 17 when Parti Pribumi Bersatu Malaysia (Bersatu) formally joined Pakatan.

Shortly after, Loke's remarks drew brickbats from PKR leaders, with Setiawangsa MP Nik Nazmi Nik Ahmad saying that it isn't fair to force Anwar to accept Dr Mahathir as the ninth prime minister candidate, given what the PKR president had gone through before.

"The political crisis that we faced after the 'Sheraton Move' was partly caused by his decision to resign without discussing with Pakatan partners and his confidence that Umno and PAS MPs were with him."

Nik Nazmi said Malaysia needed a new beginning and clean government to focus on creating a fairer economy for the people.

"The best candidate is Anwar," he added.

Anwar's aide Farhash Wafa Salvador Mubarak also shot back at Loke, saying that DAP and Amanah should state their stand "behind the man who brought us all together".

"Is this how you repay Anwar for a friendship built over 20 years? Anwar faced many challenges and was often labelled as being too liberal and distant from the Malay community for his loyalty to DAP.

"The actions and statement by DAP and Amanah for not standing firm behind Anwar is disheartening and unbecoming of a leader. 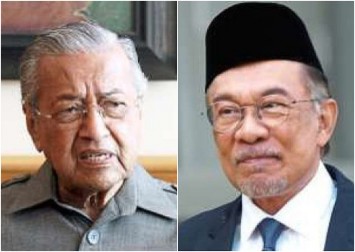 "In Loke's own words, 'there must be a clear direction of what is the way forward'. For PKR, it means that we will never let Anwar and Malaysians be taken for a ride ever again," Farhash said.

DAP supremo Lim Kit Siang's political secretary Syahredzan Johan also weighed in on the matter, saying that there should be no more delays behind Pakatan's choice for premier.

"We told people it was Tuesday. Tuesday has come and gone. It's now Wednesday night. We need an answer, that's all.

"Yes or no. If no, we negotiate again. We must not keep the people waiting in the dark," he tweeted.

Pakatan was expected to announce its choice for premier on Tuesday, following a meeting last Tuesday (June 9).

However, a statement issued by Pakatan secretary-general Saifuddin Nasution Ismail late Tuesday said that Pakatan respects the views given by various parties and it will issue an official statement once a final decision is reached.

He said Pakatan has already made a decision about the matter, but they have to refer to Warisan and MPs aligned with Dr Mahathir before making a public announcement.