GEORGE TOWN - Twenty-eight passengers had to wade through ankle-deep water before boarding their aircraft due to flash flood at the Penang International Airport (PIA).

The flood at the airport's departure lounge of turbo-prop aircraft was caused by continuous rainfall for one and a half hours starting from 8.30am.

Some passengers on their way to Subang Airport even removed their shoes during the 9.30am incident yesterday.

“The flood was caused by unusually heavy rain, with rainfall recorded at 48.8mm within 90 minutes. We could not reposition the aircraft as it was near departure time,” he said. 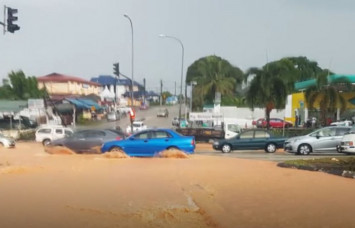 After the passengers boarded their flight, Mohd Nadzim said the lounge was closed for an hour for cleaning.

He said during the downpour, all the drainage and on-site detection (OSD) tanks in PIA were functioning well.

Meanwhile, state Tourism Development, Heritage, Culture and Arts Committee chairman Yeoh Soon Hin urged Malaysia Air­ports Holdings to look into the cause so that a similar incident would not happen again.

"The airport gives tourists the first impression of the city. This incident should not have happened as it would present a negative image of Penang.

"The relevant airport departments should take immediate action to improve the airport's facilities. There must be a cause to it," he said in a statement.

Yeoh said he had received input from many people on ways to improve airport facilities.

"I have also met with the airport management and I have requested for the upgrading of the facilities and services at the airport.

"I hope all the departments can co-operate with the Penang government to turn Penang into a city of international standard," he said.

On the airport's expansion, Yeoh said he hoped to get "good news" from the Transport Ministry.

In the past, the inline baggage area and arrival hall of the PIA were submerged in ankle-deep water after heavy rain.