Solemn moment: Friends and family members paying their last respects to Moey during the wake in Butterworth.

BUTTERWORTH, Malaysia - She stood quietly without uttering a word.

She then placed her hands on the casket and stroked it gently like a mother usually does to her baby.

Seconds later, tears began to roll down Moey Yun Peng's mother's cheeks as she bid farewell to him.

Moey's elder brother who was standing close by tried to put on a smile but deep down inside, one could see his sorrow.

A few of Moey's younger cousins participated in a short and simple funeral ritual at his home in Taman Kempas here. 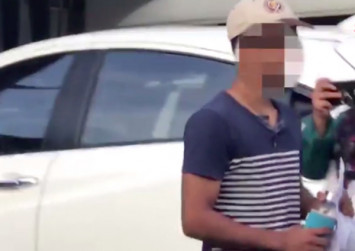 They were among the more than 200 people including family members and close friends who came to pay their last respects.

The cortege left the home at 10.50am for the Berapit Chinese Cemetery where Moey's remains were cremated.

Although saddened by the loss just before the Chinese New Year, Moey's family members were at least glad that his body was recovered from the SUV wreckage under the bridge and could be cremated.

On Sunday, Moey was crossing the bridge to Butterworth at about 3am when a car driven by his friend slammed into his rear left flank at high speed, causing his car to spin and flip over the bridge's parapet.

It was reported that Moey and the 21-year-old driver had earlier attended another friend's birthday party at a club in Chulia Street.