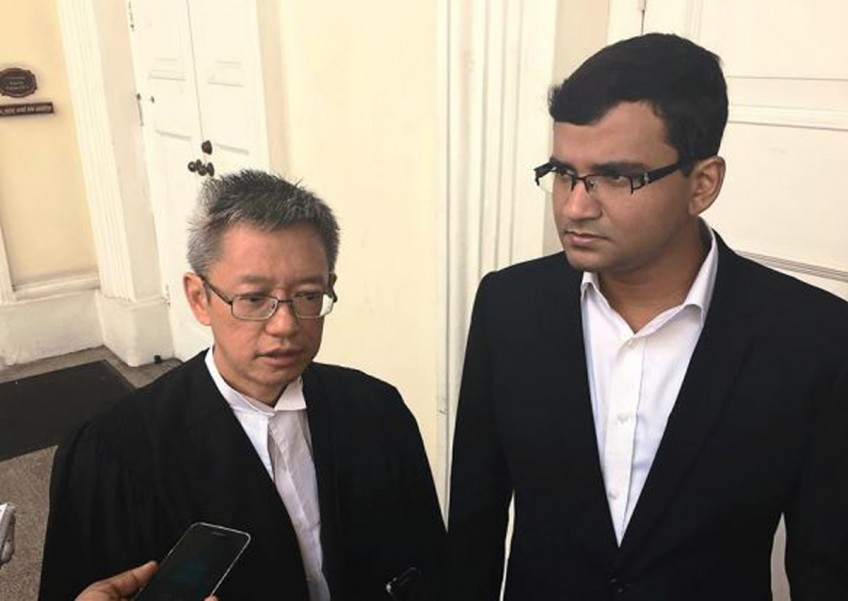 Mr Predeep (right) and his counsel Leong Wai Hong speaking to the press outside the courtroom at George Town.
The Star/ANN

In dismissing the claim with RM100,000 (S$32,530) cost, Judicial Comm­issioner Azmi Ariffin said the plaintiffs failed to prove that the article entitled "Indian-interest group claims thugs interrupted meeting" published online on Dec 4 was defamatory when read in its entirety.

Azmi pointed out that Malay­siakini had used stronger words in its report on the incident but the news portal was not sued.

"It is a bit strange that no action was taken against N. Ganesan, who started the ball rolling," he held in his judgment.

It was reported that Concerned Citizens of the Indian Community representative N. Ganesan had claimed in a press conference that thugs were hired to disrupt a meeting on Nov 30, at the Caring Society Complex.

He added that seeking responses from all parties before publishing was necessary, but it was justifiable and accepted in this case as Predeep had first-hand information from Ganesan.

"When read as a whole, there is no malice whatsoever. Malay­siakini's report sounded more serious and it is puzzling for the plaintiffs to maintain that Malay­siakini was not defamatory.

"The article printed was of public interest. The defence of qualified privilege can be revok­ed in the presence of malice, which in this case, the plaintiffs have failed to prove," he added.

In Lim and Dr Ramasamy's joint statement of claim, they alleged that Predeep and New Straits Times had intentionally, incorrectly and maliciously caused the article to be written, printed and published at the daily's website on Dec 4, 2013.

The plaintiffs sought general, aggravated and exemplary damages with costs, together with a published apology as well as a withdrawal of the article.

NST and Predeep, in their statement of defence, said the online article appeared for only a short time and was removed on the same day of publication.

When approached after the judgment, Predeep said he felt vindicated by the ruling.

Lim and Dr Ramasamy were not present in court for the judgment, but Lim later said in a statement that his solicitors would file an appeal.