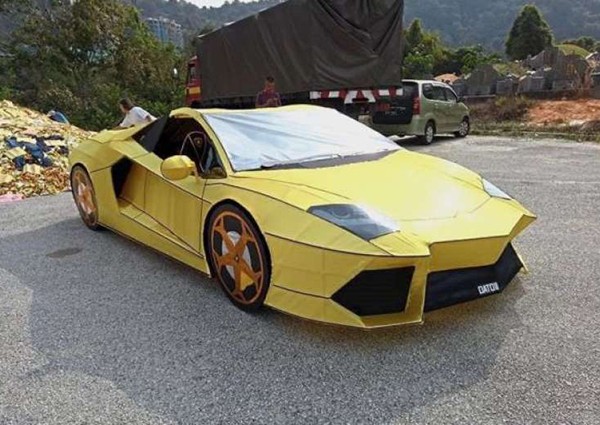 KUALA LUMPUR - A Malaysian craftsman has made a golden Lamborghini sports car out of paper for a family in Penang to burn this coming Chinese All Souls Day (Qing Ming Festival), Sin Chew Daily reported.

Paper effigy craftsman Lin Zhao Wei, 26, from Sungai Petani, Kedah, arranged for a six-wheel lorry to deliver the paper car to his customer.

Lin said a funeral services company in Penang approached him with the order.

With the help of his friend Xu Rong Yao, 30, who specialises in computer technical design work, he spent a month making it.

Lin said he has previously made a mock Porsche.

"I also received orders for super bikes, yachts, aeroplanes and bicycles. Organisations approach me for effigies, too," said Lin, who makes the effigies at his house in Taman Intan.

He learnt the art from a relative.

The Qing Ming Festival, also known as Tomb Sweeping Festival, is a time for Chinese people to honour their deceased relatives. They believe that burning mock money and paper gifts will ensure that their ancestors are not short of material comforts in the afterworld.