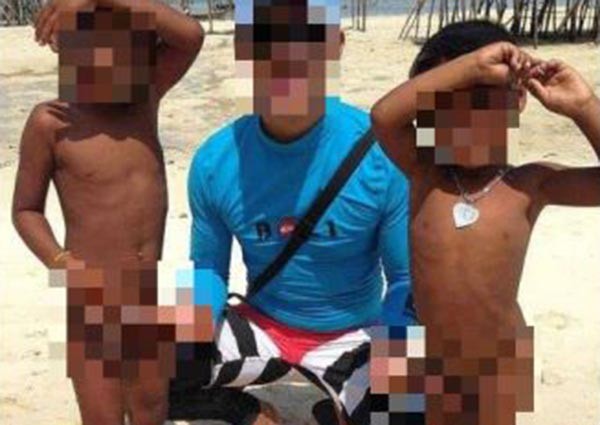 KOTA KINABALU - Police are investigating a picture of a man touching the penises of two little boys on a beach, which has been circulating on social media.

Semporna police chief Supt Peter Umbuas said they were aware of the photo and were trying to determine where and when it was taken.

"We initiated our investigations under Section 107 of the Criminal Procedure Code for nudity and carrying out an obscene act in a public place," he said.

"The latest photo comes under that and our investigations are continuing," he said.

Another picture showed a group of Asian tourists posing for a photo with a little boy standing naked in front of them.

The photo of the man holding the private parts of the two boys, aged between two and three, was the latest to emerge following pictures of Asian tourists stripping naked on an island.

"We welcome them as visitors and they should respect our cultural and religious values," he said.

He said the tourists, who behaved indecently, were insulting local communities.

"Those little boys did not know any better and were taken advantage of," said Razak.

State Tourism, Culture and Environment Minister Datuk Masidi Manjun said local authorities would be meeting Semporna tourism players on Sunday to find ways of preventing a repeat of these incidents.

[[nid:202500]]
SUBSCRIBE TO OUR NEWSLETTER
Your daily good stuff - AsiaOne stories delivered straight to your inbox