PKR MPs say it again: Yes to Anwar as PM, no to Dr Mahathir

This is in spite of other Pakatan Harapan coalition partners, DAP and Amanah, believing that Dr Mahathir would be a better candidate as he could bring in more Malay support as well as garner stronger backing in Parliament.

The party’s Kapar MP Datuk Abdullah Sani Abdul Hamid said the equation was simple for the PKR lawmakers - they did not want Dr Mahathir back in a leadership position.

“We are currently in this position after winning the 2018 general election because of him.

“Why bring him back and put him in the top position and face the risk of a repeat of the trouble he had created?” asked Abdullah Sani.

Abdullah Sani added it would not be a big deal if Anwar was not able to garner sufficient numbers in Parliament as claimed by some.

PKR’s Padang Serai MP M. Karupaiya said he was in solidarity with his party’s fellow MPs in insisting that Anwar was the first choice for prime minister.

“As far as I am concerned, Dr Mahathir is the second option after Anwar.

“There is talk that Dr Mahathir will be the prime minister first and then hand over the position to Anwar after six months, why go through so much of hassle?’’ asked Karupaiya.

He said since the seat will be given to Anwar, why not appoint him as the prime minister at the beginning instead of waiting for six months. 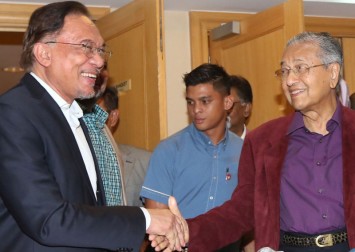 When contacted, several other PKR MPs said they have been cautioned not to discuss the matter with the media by their party leaders.

MPs of the other component parties who were contacted also said the same.

A DAP MP, who declined to be named, however said his party was backing Dr Mahathir because he had the numbers.

Both DAP and Amanah issued a joint statement last week saying that Anwar had the support of merely 96 MPs out of the 222 MPs in Parliament.

The statement also claimed it had been decided and agreed in the Pakatan presidential council meeting that Dr Mahathir would be the nation’s ninth prime minister in the event Anwar is unable to get sufficient support in Parliament.

Meanwhile, Pakatan-friendly Selangor Bersatu assemblyman Mohd Shaid Rosli said Dr Mahathir should be resting at home instead of jumping back into the rat race.

“But as far as we are concerned, we have to save our Bersatu from sinking and the only way for us to do this is have Tun (Dr Mahathir) become the premier.

“We also have to combine forces with Pakatan.

“And since it seems that Sarawak and Sabah leaders are not too keen on having Anwar helm the nation, we have no choice but to have Tun do it,’’ said Mohd Shaid who is the Kuala Selangor Bersatu division chief.

Read Also
Malaysia's PKR says it will support only Anwar as its PM candidate, not Mahathir 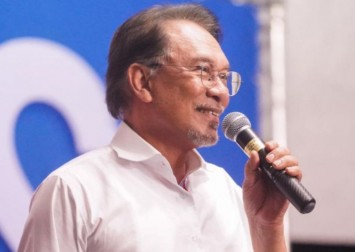 It was reported in the media recently that Sarawak Chief Minister Datuk Patinggi Abang Johari Openg had declined to meet Anwar who had flown in to see him to secure the support of the 17 Gabungan Parti Sarawak coalition MPs.

Mohd Shaid said from what he knew, the Pakatan presidential council had come-up with a Plan A and Plan B to address the matter.

“In Plan B, Tun would be the prime minister and Anwar his deputy,’’ claimed Mohd Shaid.

He added both DAP and Amanah were correct in saying that Anwar did not have sufficient support in Parliament to retake the nation’s administration from the Perikatan government made-up of Bersatu, Umno and PAS.