Consumers and retailers in Malaysia have complained there has been an inconsistent supply of price-controlled eggs, which public officials said was due to high demand after Covid-19 regulations eased.

Days into Malaysian Prime Minister Anwar Ibrahim's premiership, there's no time for a honeymoon period as he gets cracking on addressing an egg shortage so severe, it has attracted claims of a cartel conspiracy.

Consumers and retailers have complained there has been an inconsistent supply of price-controlled eggs, which public officials said was due to high demand after Covid-19 regulations eased.

"With the economy now fully reopened and people confident enough to travel and spend, there is an increase in food consumption beyond what was expected," Department of Statistics Malaysia chief statistician Mohd Uzir Mahidin was quoted as saying by English newspaper The Star on Tuesday.

The egg shortage was a popular topic in the recently concluded Malaysian general election, one which Anwar himself had used to highlight the purported failure of his predecessors who were in charge during the pandemic.

"Three years came and went from [former prime ministers] Muhyiddin Yassin to Ismail Sabri [Yaakob] … but we don't even have eggs now," Anwar said on Nov 6 when stumping for his Pakatan Harapan coalition in the northern island state of Penang.

Anwar, who clinched the top job last Thursday after 24 years of trying, has since pledged to make bread-and-butter issues a key focus of his administration. But his earlier criticism of previous governments may leave him with egg on his face.

Social media was flooded with posts of pallets of eggs stacked up in supermarkets in the aftermath of Anwar's appointment to office, sparking some claims of egg "cartels" allegedly holding back supply to artificially create scarcity to scuttle the chances for Ismail Sabri's Barisan Nasional alliance in the recent polls.

"Before the election, they hid it so that the people would be angry. After [they] won many seats … suddenly there's plenty," wrote Twitter user Fadzil Ali. It was not clear which coalition he was referring to, but he insisted the conspiracy was "clear as day".

Ameer, who said he raised concerns with the federal government about the shortage since June, said the main issue was that production costs had soared beyond the government ceiling price of between 41 cents and 45 cents an egg – a rate which is determined by the grade of the egg. 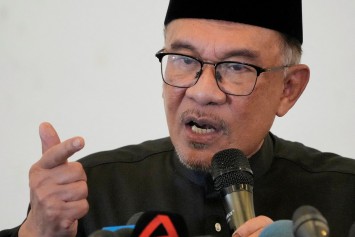 Stocks in supermarkets routinely run out by midmorning, he said, and demand was likely to remain high with the approaching Christmas holidays and the Lunar New Year celebrations in January.

"The public cannot hope for a miracle to happen," Ameer said.

The government has warned there is no immediate solution to the situation, especially with the Malaysian ringgit weakening against the US dollar affecting producers' profits, who typically import hen feed.

The nation recently faced a similar problem in its poultry supply, leading to a suspension of fresh chicken exports in June. The ban was most felt by neighbour Singapore, which at that point relied on Malaysia for a monthly supply of 3.6 million birds.

"All that's left now are the big farms, the rest are empty," Yani told This Week in Asia.

Credit rating agency Fitch expects that cost of living issues will continue to be an obstacle to Anwar's administration amid weakening external demand and public pressure for the continued use of subsidies to mitigate the price hikes.