JOHOR BARU - Police have recovered the white BMW that was used in the brutal murder of a 44-year-old man at a Taman Pelangi petrol station here.

"The car was found without its registration plate," he told a press conference Wednesday. 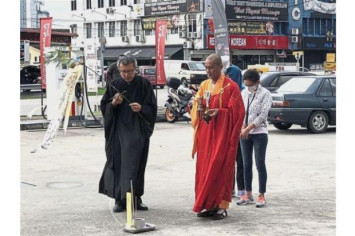 He said the car, considered one of the two murder weapons used in the incident, was spotted by members of the public at 3pm on Tuesday (Dec 26).

Comm Mohd Khalil added that police have released four of the 15 suspects who were arrested during the investigation.

"We are still looking for three more main suspects to aid in our investigations into the petrol station murder," he said.

The case caught wide public attention when a video clip was uploaded online showing the victim, identified as a triad member, being dragged and stabbed by four suspects before he was run over with the white BMW twice.

Police confirmed that the deceased died of a stab wound.