KOTA BARU - A man here said he agreed to marry off his underage daughter so that she can have a better life.

Che Rahim Che Deraman, 60, said he and his wife were willing to give their 15-year-old daughter away as a second wife to a 44-year-old Rela (People's Volunteer Corps) member because they did not want their youngest daughter to continue living a hard life of poverty.

“As long as our daughter is happy, we are happy,” said Che Rahim here yesterday.

The father confirmed that the marriage was solemnised in Tumpat in July upon the consent of the Syariah Court, as the groom had to seek permission to engage in polygamy.

Che Rahim, who has 13 children, said all of them were now married.

“Life had been tough for us. I raised my 13 children with a measly income from my small sundry shop. I could barely make RM300 a month.

“But, I have managed to raise my children and they are all now married.

“My youngest daughter is also happily married although she is still a minor,” he said. 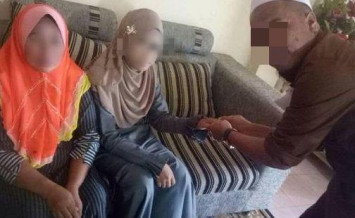 The young bride said she had agreed to the marriage although she had known the man for only several months.

“People can say what they like. I am least concerned about what people think of me.

“I am happy, and I will try to keep my husband happy. That is all that matters to me,” she said.

The girl said people were mostly good at criticising and condemning others.

“We cannot keep worrying about what people may think of us,” she said.

This case comes after the one involving an 11-year-old girl who was married off to a 41-year-old scrap rubber dealer in Narathiwat, Thailand.

The girl is now under the protection of the Narathiwat provincial Social Development and Human Security Ministry.