Malaysia is a multiracial country.

In a viral TikTok video that has amassed 17,000 views, the Malaysian Muslim preacher Syakir Nasoha accused Buddhists, Hindus and Dayaks - the indigenous people of the eastern Malaysian states of Sarawak and Sabah - of killing Muslims, sparking fears that his words would incite violence against those groups.

Meanwhile, even as critics lined up to denounce the preacher's video, a senior politician from the Bersatu party, Borhanuddin Che Rahim, was making waves on Facebook for a post in which he questioned the role of the badminton player S. Kisona, who is of ethnic Indian descent, in the national team.

In a post that has since been deleted, Borhanuddin asked "which estate" had the Badminton Association of Malaysia recruited the player from, using a derogatory term for ethnic Indians. Critics said the use of the word "estate" appeared to be a reference to the "rubber estates" where some Indian migrant labourers worked during the colonial era.

The politician apologised, but not before his comments were condemned as "unacceptable" by Youth and Sports Minister Ahmad Faizal Azumu as well as the Badminton Association of Malaysia. The Bersatu party is a constituent of the ruling coalition government led by Prime Minister Ismail Sabri Yakoob.

The two incidents highlighted concerns over growing intolerance in the multiracial country, where a senior counterterrorism official has recently warned that religious and ethnically motivated extremism poses the single biggest threat of a terrorist incident. The incidents have also highlighted claims that this intolerance is being fuelled by politicians seeking to exploit racial divisions.

Disgraceful how low and hateful some malaysians are..If this hatred continues they may NEVER win a MAJIR TITTLE like Oly or WC...Btw they could hate Indians but the reigning WS World Champ is an INDIAN (PV Sindhu) a Badminton Legend wirh 5 WC Medals + 2 Oly Medals #kisona https://t.co/i45hcLnBxX

In the TikTok video, Syakir tells viewers that Buddhists have bombed mosques and Islamic boarding schools in southern Thailand and that Hindus have killed Muslims in Pakistan and India. He then pointedly asks his viewers to remember that "these two religions are here, in Malaysia". He also warned that "at the end of time, infidels will scramble together to kill Muslims".

Civil society groups and activists were swift to denounce the video, some claiming it amounted to incitement to violence and some calling for Syakir to be arrested.

Mohd Tawfik Ismail, a former legislator of the United Malays National Organisation (Umno), reported the preacher to the police, saying his speech was a "threat" to harmonious relations.

"The danger is that a person who dons religious garb and speaks at a public forum without regard to the truth can influence fanatics in the audience to commit crimes in the name of religion," said Tawfik, whose former party is part of the ruling coalition alongside Bersatu.

Other parties were quick to condemn the preacher. Thanussha Francis Xavier, vice-president of the Malaysian United Democratic Alliance, said the preacher's comments were cause for grave concern as they could "instil hatred against minorities" and "threaten our safety".

"Just imagine if unstable individuals genuinely believe that the Hindus and Buddhists are out to kill them, how long would it take for them to riot or cause harm to minority communities?" she asked.

Meanwhile, the Sains party accused Syakir of "being intellectually dishonest" and "blatantly disregarding" the Hadiths, or sayings of the Prophet Mohammed, that ask Muslims to take care of mu'ahid (non-Muslims who live in peace with Muslims).

Amid the uproar, local media reported that police had received some 3,000 complaints against the preacher.

Some of those complaints came from members of the Dayak community, whom Syakir accuses in the video of killing Muslims in Indonesia and Papua New Guinea.

Tawfik said the comments came at a particularly sensitive time for the community, which already felt marginalised through unfair treatment by the federal government. 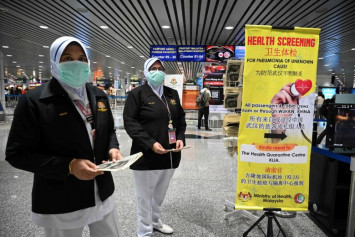 Sabah and Sarawak on Borneo island, where the - largely Christian - Dayak community lives, hold much of the nation's oil and gas reserves but are less developed than Peninsular Malaysia.

"In the current sensitive political climate where the residents of Sabah and Sarawak feel they're unfairly treated in the federal system, an irresponsible remark about Dayaks by a renegade preacher from Kedah will add fuel to the simmering discontent," Tawfik said.

Global Human Rights Federation president S. Shashi Kumar called for Syakir to be arrested immediately. "We, the non-Muslims, are fed-up of being targeted. Enough is enough," local media quoted him as saying.

In a YouTube post uploaded on Tuesday, Syakir said the TikTok video was based on a sermon which was originally recorded in 2017 and that it had been taken out of context.

Many observers, particularly among young Malaysians, believe recent political instability is to blame for the rising intolerance.

After decades of remarkable political stability - Umno had ruled for 61 years before it was ousted by the Pakatan Harapan in a shock result to the 2018 election - the country has gone through three prime ministers in as many years.

Critics say amid the competition for votes, some politicians see exploiting racial and religious differences as low-hanging fruit. For some, Borhanuddin's post was just the latest example of this.

In 2019, messages urging the country's Malay-Muslim majority to boycott goods produced by non-Muslims, even those that were halal, emerged on Facebook and WhatsApp chat groups, prompting a member of the Perak royal household to call it a "ticking time bomb". The movement later died down.

Read Also
Racial politics: where it all went wrong for the Malaysian Chinese Association? 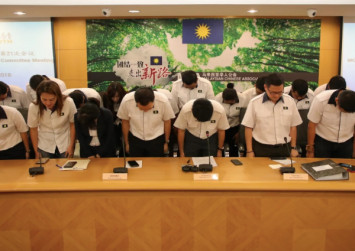 "Malaysia is becoming more intolerant and politics is to blame. Right before each election cycle, without fail, racial and religious rhetoric is hyped up to cause division and to influence voters in favour of race-based political parties and to topple administrations," said the Malaysian United Democratic Alliance's Thanussha, whose party was set up only a year ago and has campaigned to lower the voting age to 18 from 21.

She said that young people were fed up of divisive rhetoric and vowed that her party would offer a new brand of politics based on policies and data.

Independent political observer Mikhail Hafiz said that over the past few decades Malaysia had suffered from "a steadily degenerating value system" and a lack of a national identity and that this had enabled "politicians and other partisan factions to indulge in racial and religious polarisation for personal gain".

Meanwhile the Sains party - another relatively new political force, set up less than five months ago - warned that if the country's divisions were not healed it risked losing some of its best young minds in a brain drain.

"If the current political instability projects a future where people do not have access to equality, then it is only human to seek greener pastures to places where their hard work and skills can be appreciated [rather than face discrimination for] their ethnicities, faiths, sexual orientations, genders or political associations," Sains said.