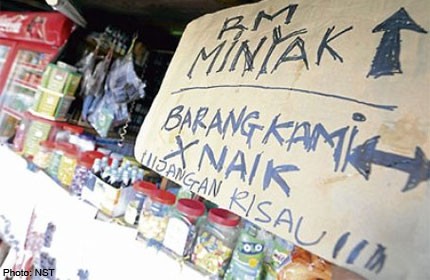 IPOH - The Domestic Trade and Consumer Affairs Ministry said there is a possibility of price hikes in sugar and flour as part of the government's subsidy rationalisation.

Minister Datuk Hasan Malek said it would be announced during the tabling of the 2014 Budget on Oct 25.

"The government's intention is to strengthen the economy. We do not want to be like the United States, where its economy has been shut down," he said after opening a briefing on current issues and consumerism campaign with hawkers and petty traders.

Hasan urged consumers to look at the positive side of the government's actions, and said any new measures brought about by the government was meant for the overall wellbeing of the people.

"Sometimes certain actions need to be carried out. For me, the country's interest is paramount."

On a separate matter, Hasan said the government would consider increasing the loan amount in micro-credit schemes from RM3,000 (S$1,200) to RM10,000.

He said details of the new loan rates would be announced in the budget, and he noted that good news was also in store for cooperatives and the franchise sector

Earlier, Hasan said the current subsidies were enjoyed by everyone and this did not accord with the government's intention to channel subsidies to those who truly deserved them.

"From a person who owns 10 houses or 10 cars to foreign workers, they are all enjoying our subsidy," he said, urging the people to change their mindset.

He said the recent subsidy rationalisation of fuel, which led to a 20 sen increase of RON 95 petrol, would save the government RM1.1 billion.

"The savings can then be given to people who need it," he said, adding that the rationalisation of subsidies did not justify traders increasing the prices of goods as it translated to only one per cent increase in expenses.