Prices of some fish set to rise after KL export ban 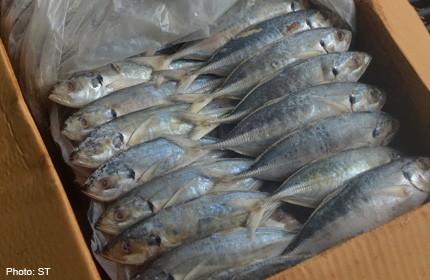 (Above) One finlet scad (selar), one of the five fish types banned for export.

SINGAPORE - Singapore fish importers are paying at least 20 per cent more for five types of fish banned for export for two months by Malaysia.

The increase will, in turn, likely force fishmongers at wet markets to raise their prices by between 10 per cent and 30 per cent, they told The Straits Times on Wednesday.

But the situation varies at Singapore's three main supermarket chains.

Prices at Sheng Siong have risen by an average of 10 per cent while NTUC FairPrice expects prices to increase soon.

Cold Storage, however, is keeping its prices unchanged for now, said a spokesman.

The fish that Malaysia has banned for export since last Wednesday are: Indian mackerel (kembung), short bodied mackerel (pelaling), hardtail scad (cencaru), round scad (selayang) and one finlet scad (selar).

The importers said Malaysia's Fisheries Development Authority notified them of the ban three days before it took effect.

It did not give any reason but the president of the Singapore Fish Merchants' General Association, Mr Lee Boon Cheow, suspects that it could be due to a shortage of the fish in Malaysia.

"Typically, during this time, there is a shortage because it is the fasting (Ramadan) period and the fishermen don't go out to sea. So supply falls," he said.

The association will meet today to discuss the issue, Mr Lee added.

Singapore gets 28 per cent of its fish supply from Malaysia, said the Agri-Food and Veterinary Authority (AVA). The banned species form the bulk of the imports.

The AVA also said it is monitoring the situation and that importers are looking at alternative sources to meet local demand.

Fish merchants like Mr Kenneth Lim have already turned to suppliers from Indonesia and Thailand.

"We've very good links with suppliers all over the world. We just call them and, the next day, the fish is here," said Mr Lim, who is the owner of Elite Fisheries and Trading. He imports about 10 tonnes of fish from Malaysia each month, half of which are of the banned variety.

But smaller merchants like Mr Eric Teo are in a bind.

He said prices of the kembung and selar fish he sells have risen from $4.50 per kg last week to about $7.50 per kg - an almost 70 per cent increase.

Size matters in the business, according to Mr Lee.

"Larger wholesalers and retailers have greater bargaining power. Their suppliers won't dare to increase prices by much.

Sheng Siong's spokesman said supply from Thailand and Indonesia is helping to meet demand, "so our prices did not go up significantly".

FairPrice, Singapore's largest grocery store chain with 116 outlets, expects prices of the banned fish "to increase slightly by the end of the week".

It is working closely with suppliers and has various sources to tap, added its director of purchasing and merchandising, Mrs Mui-Kok Kah Wei.

Meanwhile, Singaporeans like cleaner Joriah Awang are making the switch to other types of fish. The 56-year-old used to stir-fry the kembung and selar fish with sambal for her daily lunch or breakfast.

Now, she uses other small fish like the kekek.

Similarly, teacher Peggy Lim, 46, who regularly cooks the banned fish, said: "When prices increase, I'll look at the fish's freshness. If it's so-so, I won't buy it."