Earlier, a protest by family and friends of two teenagers arrested in connection with the murder forced police to tighten security at the Petaling Jaya court complex.

"We just want to ensure that court proceedings are not disrupted," he said.

A child activist, who was among the protesters, criticised the manner in which two teenagers were brought to court for a remand hearing.

Voice of the Children's Dr Hartini Zainudin was shocked that the boys, aged 14 and 16, were handcuffed and barefooted when they were brought to the Petaling Jaya magistrate's court on Sunday.

The teenagers' lawyer is expected to appeal against the remand order at the Shah Alam High Court today.

The case is being investigated under Section 302 of the Penal Code for murder. 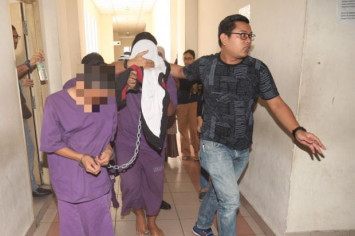 Last week, police detained Sami­rah and her ex-husband, both 43.

The man has been since been released by police.

Nazrin's death was initially believed to have been due to a fire at his home on June 14.

Early last month, police reclassified the case as murder following a forensic investigation by the Fire and Rescue Department.