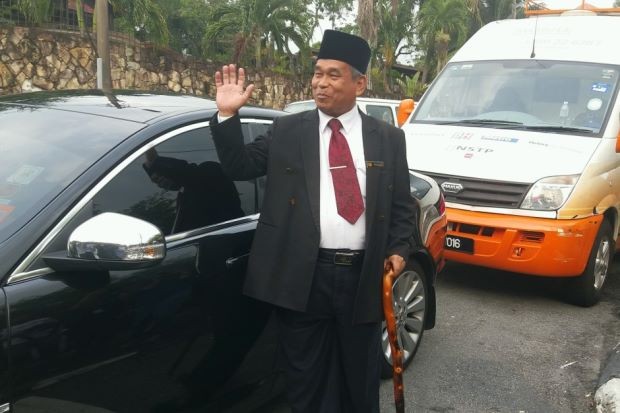 Arriving in a black Jaguar, with the words "Raja Bomoh" on an emblem above its licence plate, Ibrahim Mat Zin (pic) exited from the front passenger seat.

Wearing a black suit complete with songkok, Ibrahim stood outside his own luxury vehicle for about five minutes as reporters, who have been camping outside Najib's house, rushed to get his comments.

Ibrahim said he came here to see the situation at Taman Duta for himself.

"I came here to visit the place. Our former prime minister was good, and had made contributions to the country," he said.

He however did not perform any rituals.

Najib was returning from the MACC headquarters after his second day of questioning over an investigation into SRC International, a subsidiary of the controversial 1Malaysia Development Berhad (1MDB) fund.

Ibrahim first made headlines in March 2014 when he conducted two rituals at the Kuala Lumpur International Airport in an attempt to locate missing Malaysia Airlines flight MH370.

He also performed a ritual outside the National Institute of Forensic Medicine at Hospital Kuala Lumpur after the February 2017 assassination of Kim Jong-nam, the half-brother of North Korean leader Kim Jong-un.

As tensions between Malaysia and North Korea built up over the assassination and subsequent investigation, Ibrahim also performed a ritual using coconuts and sticks on a beach in Bagan Lalang, Selangor, purportedly to "defend" Malaysia from North Korea.

He expressed an interest to contest in the Bagan Datuk parliamentary seat in the 14th General Election, but was nowhere to be seen on Nomination Day on April 28.