KUALA LUMPUR: Footage of a RapidKL bus ramming into several vehicles on a busy road, believed to be in Ampang, has been going viral on social media and messaging apps.

The one-and-a-half minute footage shows the bus being pursued by several motorcycles, whose riders are heard shouting expletives at the driver and telling him to stop.

The bus is shown weaving recklessly through traffic before ramming into two cars but continues its rampage.

It rams into several other vehicles nearly 100m after the first collision and is then caught in gridlocked traffic.

The motorcyclists are then heard shouting as the bus driver tries to flee on foot. 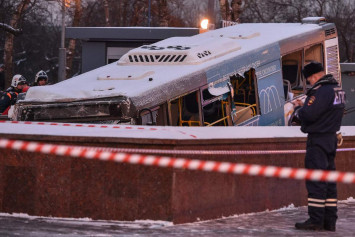 One of the motorcyclists who filmed the video gets off his bike and continues the chase.

Another video shows a man clad in an orange shirt - believed to be the bus driver - sitting on the ground. His face is bruised and an angry crowd can be heard shouting at him while someone asks him why he tried to run away.

Facebook user Azri Arip, who uploaded the videos, alleged that the bus rammed into a car in Taman Keramat AU2, causing the vehicle to plough into his burger stall.

He also claimed that his mother, who was carrying a two-month-old baby, was hit by the vehicle.

Azri also claimed that he pursued the bus from Taman Keramat AU2 to Ampang near the Middle Ring Road 2 junction.

"The incident occurred at around 8pm. The bus driver has been taken to the Ampang Hospital for medical treatment.

"Our investigation officer is at the scene to gather more information," he said.

Meanwhile, RapidKL spokesperson Azhar Ghazali said that they would give full co-operation to the police, adding that they were also getting full details of what happened.