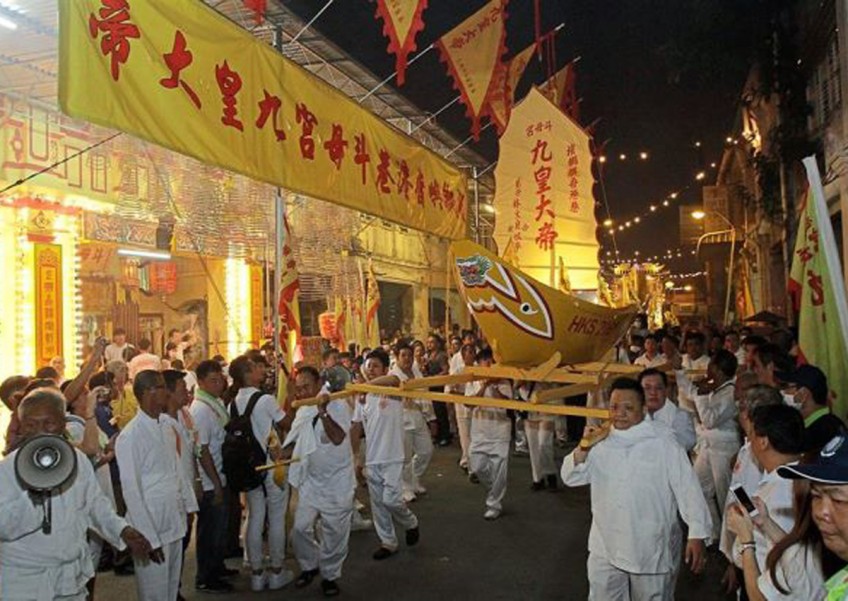 Devotees carrying a ceremonial boat ferrying the sacred urn in the inner city procession to the seashore where the vessel is set ablaze and left to drift, signifying the deities’ return to heaven.
Chan Boon Kai/The Star/ANN

GEORGE TOWN - Despite the haze breaching unhealthy levels, thousands of devotees thronged various temples to bid farewell to the deities at the end of the nine-day Kew Ong Yeah (Nine Emperor Gods) festival.

Beautifully decorated floats were parked along several streets in the inner city for devotees pay their respects to the deities.

The smell of joss sticks and fresh flowers and the loud sound of drums filled the air at the temples.

One of the grander celebrations was seen at Tow Boe Keong Kew Ong Tai Tay Keong Thuah temple in Lintang Macallum 2 where two brightly lit floats were displayed at the temple premises before the procession.

The festival, observed by Taoists, is dedicated to the nine sons of Dou Mu, the Goddess of the North Star who is believed to control the Books of Life and Death.

Her sons, deified as 'ren huang' (human sovereigns), are said to have the ability to cure illnesses and conferring luck, wealth, and long life to devotees.

Devotees believe the gods arrive through the waterway and processions are usually held from temples to the river or seashore as a symbolic gesture.

During the nine days of the festival which ended yesterday, many devotees practised a strict vegetarian diet to cleanse and purify themselves.