Rosmah on audio recordings released by MACC: 'I have nothing to say'

KUALA LUMPUR - Datin Seri Rosmah Mansor, who is implicated in the audio recordings released by the Malaysian Anti-Corruption Commission (MACC), is keeping mum on the matter.

"My lawyers will take care of it," she said shortly before walking away.

The press, who had waited for Rosmah, caught up with her again on the ground floor.

When asked whether she would be suing the MACC, Rosmah said "I have nothing to say.''

The wife of former prime minister Datuk Seri Najib Razak was at the High Court to attend the mention of her corruption case involving a solar hybrid project in Sarawak.

Her aide, Datuk Rizal Mansor, who should have been jointly tried with her, was given an acquittal.

The case will be heard before Justice Mohamed Zaini Mazlan on Feb 3 as scheduled.

Earlier on Wednesday (Jan 8), the MACC revealed a series of nine audio recordings of high-ranking officials, including Najib, alleging this was a "criminal conspiracy at the highest level". 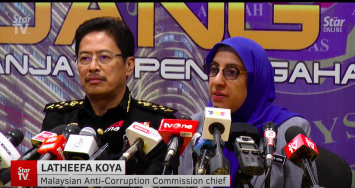 Another one, MACC alleged, was of Rosmah and Najib, where she was heard expressing her displeasure over a certain matter related to MACC investigations.