KUALA LUMPUR - Datin Seri Rosmah Mansor has been admitted to a private hospital for treatment.

This was confirmed by her lawyer Datuk Akberdin Abdul Kader in a short text message to The Star.

"Yes, she is. Doctors are examining her medical condition further and she has to be warded," he said on Tuesday (Feb 4).

When asked about the length of her hospitalisation, Akberdin could not confirm.

"Not sure. But we will inform the court," he added.

Rosmah, who is the wife of former prime minister Datuk Seri Najib Razak, did not turn up at the High Court on Monday (Feb 3) on what was supposed to be the first day of her graft trial, where she is accused of three counts of graft amounting to hundreds of millions of ringgit involving a solar hybrid project in Sarawak.

Her lawyers submitted a medical report dated Feb 2 from a hospital in Ampang that stated cervical spondylosis, osteoarthritis on both knees and chronic adrenal insufficiency as her diagnosis.

High Court judge Justice Mohamed Zaini Mazlan then adjourned the hearing and ordered it to resume on Wednesday (Feb 5). 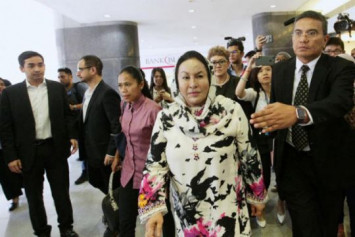 He also suggested that Rosmah attend the trial in a wheelchair and would allow short breaks during the hearing.

According to the first charge, Rosmah was accused of soliciting for herself a RM187.5mil bribe from Jepak Holdings Sdn Bhd managing director Saidi Abang Samsudin, through her former aide Datuk Rizal Mansor.

The money was a reward for helping Jepak Holdings obtain a project, through direct negotiations with the Education Ministry, to install solar hybrid systems and for the maintenance and operation of diesel generators for 369 rural schools in Sarawak.

In the second charge, she was accused of receiving RM1.5mil from Saidi as a reward for assisting Jepak Holdings obtain the same project.

All of the charges were framed under Section 16(a)(A) of the Malaysian Anti-Corruption Commission Act.