KUALA LUMPUR - Rosmah Mansor has been charged again over the solar hybrid project for rural schools in Sarawak on Wednesday (April 10), and she has pleaded not guilty.

The wife of former prime minister Najib Razak was accused of receiving a bribe of RM5 million (S$1.7 million) from Jepak Holdings' managing director Saidi Abang Samsudin through her aide Rizal Mansor, at her home on Jalan Langgak Duta, Taman Duta on Dec 20, 2016.

The money was an inducement for helping Jepak Holdings to obtain a project known as "Project Bersepadu Sistem Solar Photovoltaic (PV) Hibrid" and the genset, diesel maintenance and operation for 369 rural schools in Sarawak worth RM1.25 billion through direct negotiations with the Education Ministry.

The offence under Section 16(a)(A) of the Malaysian Anti-Corruption Commission (MACC) Act 2009 carries imprisonment of up to 20 years and a fine of no less than five times the amount of gratification or RM10,000, whichever is higher, if convicted.

Rosmah, 68, pleaded not guilty after the charge was read out to her before Sessions Court judge Azura Alwi. 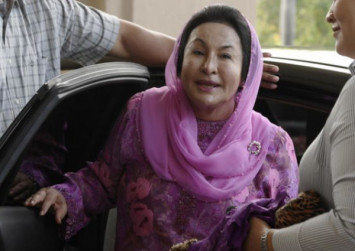 Deputy Public Prosecutor (DPP) Dusuki Mokhtar offered bail at RM1 million in one surety on grounds that the accused was charged with a serious offence.

Lawyer Akberdin Abdul Kader, however, objected and said bail was only to secure attendance. "The amount is too high. She is a full-time housewife," he said. "We ask the court to adopt a bail of RM1 million that was used in a previous case (related to the same project)."

Judge Azura then allowed bail from Rosmah's previous case to be used in this case.

DPP Dusuki also informed the court that the prosecution would apply to transfer the case to the High Court.

The case is fixed for mention on May 10.