Rosmah pleads not guilty to 17 charges of money laundering

KUALA LUMPUR - Datin Seri Rosmah Mansor has pleaded not guilty to all 17 charges of money laundering involving about RM7mil at the Sessions Court here Thursday (Oct 4).

The charges framed against her are under the Anti-Money Laundering, Anti-Terrorism Financing and Proceeds of Unlawful Activities Act (AMLATFPUAA) 2001.

Datuk Seri Gopal Sri Ram and Ahmad Akram Gharib are the prosecution team, while the defence is being led by Datuk K. Kumaraendran and Datuk Geethan Ram Vincent.

Prosecutor Sri Ram did not oppose bail and suggested a sum of RM10 million (S$3.33 million).

Read Also
Hold on to your hope in God, Najib tells Rosmah 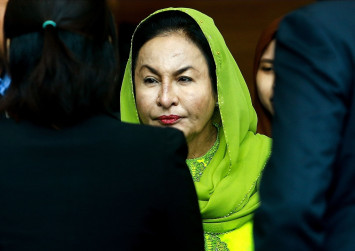 Defence lawyer Datuk Geethan Ram Vincent said: "The purpose of bail is to secure attendance and should not be punitive."

He then asked for a significantly lower bail of RM250,000.

Sri Ram also claimed that during recording of her statement, Rosmah had approached a witness and asked the witness to make a statement in her favour.

He also asked for Rosmah's passport to be surrendered and that she not approach any witnesses.

In rebuttal, Geethan said: "She is wife to former prime minister. She has been called by Malaysian Anti-Corruption Commission three times (on June 5, Sept 26 and Oct 3) and each time she has never failed to attend and gives her full-cooperation.

He added that Rosmah had no prior offences and this was her first time in court.